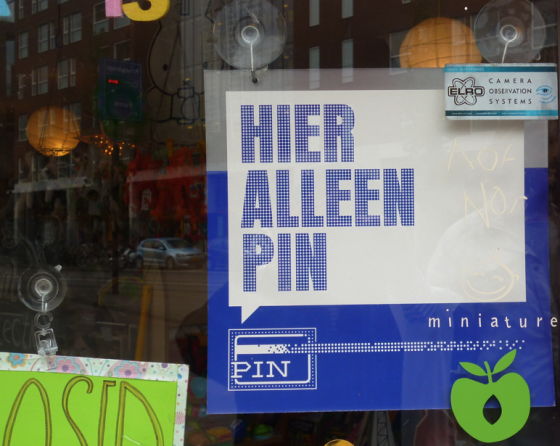 At least eight town halls in the Netherlands have stopped accepting cash payments for passports and driving licences and the number is expected to rise rapidly, the Volkskrant reported on Wednesday.

The ‘pin only’ policy has been apparent in shops, cafés, bars and restaurants for some time and is also spreading to public transport. Now, local authorities too are arguing that security as well as time and cost savings are behind the cashless trend.

‘Emptying the cash register after closing time and then depositing the money in the bank is no longer necessary. This saves time and is safer,’ a  spokesman for Hardenberg local authority told the paper.

‘There have been no complaints so far,’ said a Geldermalden spokesman. ‘Everyone was informed in time and are reminded when they apply for a new passport or driving licence.’

The trend towards a ‘pin only’ policy, has led the national ombudsman and the central bank DNB to argue for freedom of choice.

The DNB is a member of the national council on payments transfers (MOB) which calls the cashless town halls ‘a step too far because a substantial number of people can not or will not use a bank pass.’

The MOB argues that every town must have at least one payments counter which accepts cash.

The national ombudsman also says the option for cash payments must remain for use by seniors and people with disabilities.  Town halls have a monopoly position and people cannot go elsewhere to get a passport or driving licence, the ombudsman points out.