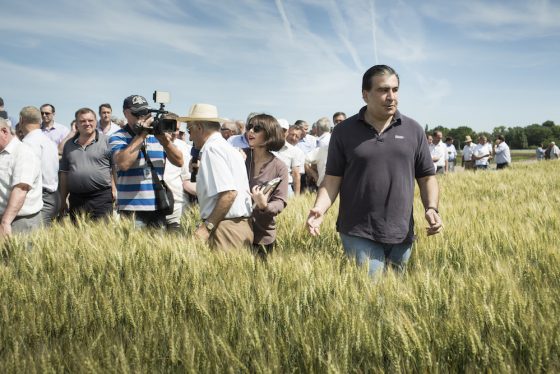 Saakasjvili looks around an experimental farm while governor of Odessa in 2015. Photo: Joel van Houdt/HH

Ukrainian opposition leader Mikheil Saakashvili arrived in the Netherlands on Wednesday, two days after he was deported to Poland by the Ukrainian border service.

Saakashvili is married to Dutch woman Sandra Roelofs and the couple have two sons. His lawyer Oscar Hammerstein, who accompanied him to Schiphol, said Saakashvili will be settling in the Netherlands.

His residency has been ‘organised and approved’ by the immigration service, Hammerstein said, adding that ‘he is delighted to be here’.

Saakashvili himself told Dutch broadcaster NOS: ‘It is always good to be here. I don’t know Rotterdam well but I am often in Zeeland, in Terneuzen, and of course Amsterdam. I am here because of what happened in Ukraine. We will see how long I stay.’

Saakashvili served as president of his native Georgia for most of the period from 2004-2013 and was then invited to Ukraine by president Petro Poroshenko, who took power after protests in 2014. He later fell out with Poroshenko and joined the opposition.

Saakashvili told a news conference in Warsaw on Tuesday that he would continue encouraging Ukrainians to stand up to authorities he considers ‘corrupt elites’, the Associated Press news agency said.