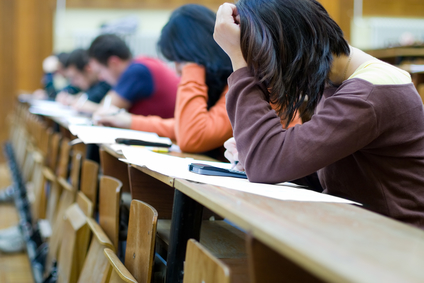 The number of foreign students doing engineering and technical degrees in the Netherlands has never been higher, reports the Financieele Dagblad on Friday.

Figures released from international education body Nuffic show that in the 2017/18 academic year, one in three Master’s degree students at the universities of Delft, Wageningen, Eindhoven and Enschede comes from abroad.

The total number of degree students has risen from 3,751 in 2006 to more than 12,000 in the current academic year, with particularly high numbers from Germany, China and India.

But the FD puts the numbers in the context of a debate around whether Dutch students are being disadvantaged by degree courses offered in English – something the Telegraaf called ‘English madness’ last month.

‘Internationalisation is a good thing but if the over-representation of foreign students becomes a problem, universities should ask themselves if they should be offering certain subjects in English,’ said Pieter Duisenberg, chairman of the Dutch universities association VSNU to the Telegraaf at the time.

His organisation told the FD on Friday that it could not confirm whether foreign students are displacing Dutch ones but said that if there was a suspicion of this, universities could reserve a number of places for local applicants.

Anne Lutgerink, a spokesperson for Nuffic, told DutchNews.nl that while foreign students are commonly charged higher fees at English and American universities, this has not necessarily been the case in the Netherlands.

She said the number of students at technical universities in general, both Dutch and international, has risen after campaigns to fill jobs in these areas – but that the amount of money from government still comes from the same pot.

‘In the US and UK, it is considered normal to attract international students from a profit perspective,’ she said. ‘That’s not considered the case in the Netherlands: they try to make it as cost-efficient as possible.’

She added that Nuffic supports internationalisation that enriches the quality of education. ‘It’s not a goal in itself,’ she added. ‘You can never say there should be a maximum or minimum of international students, but use it to the benefit of education.’

Delft University of Technology has said that from 1st February 2018, no non-EEA students will be considered for its next bachelors of computer science and engineering course, due to a massive increase in applications.

‘We are very pleased about this popularity, and our position in the league tables, but we want to ensure the quality of our education so unfortunately we have to take this step,’ a spokeswoman told DutchNews.nl.

‘It is important to have experiences with other cultures, but there must be a bit of a balance, and 50:50 Dutch and international is a nice number.’

She added that foreign students are not charged disproportionately. ‘We don’t see it as income,’ she said. ‘Non-European students pay €10,000 a year, which is what we would get from the government.’

But the FD cited the Dutch education ministry as saying it would be illegal to stop considering students from certain countries.