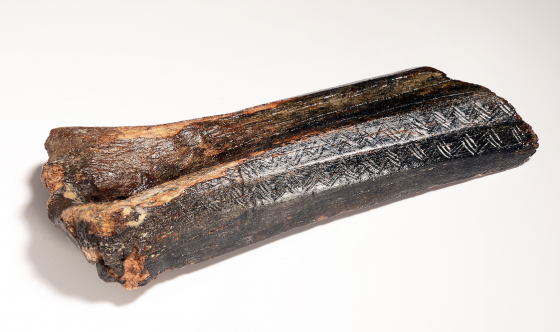 The oldest Dutch work of art is a 13,500 year-old carved bison bone dredged up from the bottom of the North Sea, archaeologists write in an article published in Antiquity magazine earlier this week.

Late Ice Age hunter gatherers roamed the area that became the North Sea but very little evidence of their presence has been found. But sometimes the sea floor yields treasures that shed light on the period. This is a confirmation, the article says, of ‘the importance of continental shelves as archaeological archives’.

In 2005 a Dutch fishing vessel caught a bison bone in its nets on the border of the Dutch part of the continental shelf. The bone, which had a distinctive zigzag pattern carved in it, ended up in the hands of a collector who, the NRC writes, ‘had good contacts with fishermen’ and agreed to let experts at the Leiden archaeological museum take a look at it.

Carbon isotope analysis showed the bone to be 13,500 years old and part of a culture that decorated animal bones with zigzag and herringbone motives. Only three other similarly carved objects have been discovered so far: a horse’s jaw in Wales, deer antlers in Northern France and moose antlers in Poland.

Main author of the article and prehistory curator at the Leiden museum Luc Amkreutz thinks these objects were not used as tools but belong in a ritualistic context. ‘I wouldn’t know what else you would do with a decorated horse’s jaw’, he told the paper.

The decoration on the Dutch bone shows a typical geometrical motif of the period. According to Amkreutz the carving is ‘very precise to start with but a bit haphazard towards the end, as if the person doing the carving lost interest.’

What the carvings mean is unclear. Some have interpreted the zigzags as symbols of movement, rhythm, water or a need for symmetry. ‘But we will never really know,’ Amkreutz said.

The article also describes a piece of a human skull that was fished up from the North Sea in 2013 and which dates from roughly the same period. The parietal bone, which may have belonged to a woman, is 13,000 years old and one of the earliest examples of Homo Sapiens remains found on Dutch territory.

The scientists have also found tiny indentations which may point to anaemia or a lack of vitamins, which would lead to scurvy or rickets. The search is now on for DNA in the skull fragment so more tests can be done.

Findings from the North Sea used to be discarded because they lacked context, Amkreutz told the NRC. ‘But by careful dating and researching the material we can show that the objects are interesting in themselves.’