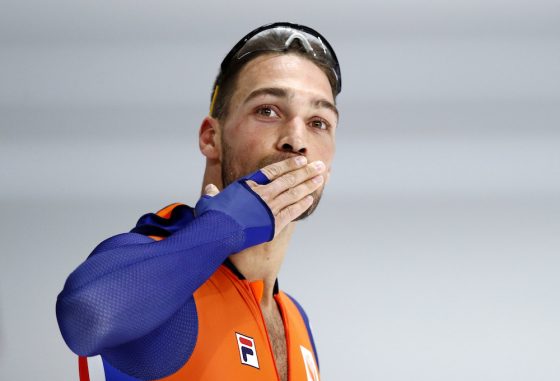 Kjeld Nuis took the gold medal in the men’s 1,500 metres at the winter Olympics in Pyeongchang in style on Tuesday, with a new track record time of 1.44.01.

His team mate Patrick Roest took silver but Koen Verweij, silver medal winner over the distance in Sochi, could manage no more than a disappointing 11th place.

Nuis and Verweij were favourites for the event after Russia’s Denis Yuskov was banned from taking part.

‘It was a tough race,’ Nuis, who began the season badly due to illness, told NOS. ‘But I thought, just keep going. The last bend was really tough but then it did not matter any more.’

There was also Dutch delight in the short track events when Yara van Kerkhof took the bronze medal in the women’s 500 metres, later promoted to silver after Korea’s Choi Min-jeong was disqualified.

But there was disappointment for the Netherlands when the men’s relay short track team – seen as favourites for the title – were disqualified in the semi-finals.