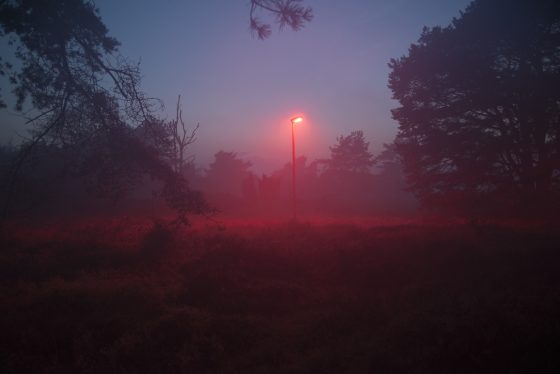 Part of the experiment into bats and lighting. Photo: Kamiel Spoelstra / NIOO-KNAW

People living in a new residential area in Barneveld, a staunchly Bible belt town of 65,000 in the centre of the Netherlands, are up in arms about new bat-friendly street lighting, which has turned their neighbourhood into what they feel is a red light district.

Since last week, the Nesciostraat has had red street lighting, because bats are apparently less sensitive to that than traditional street lamps.

‘It’s awful,’ resident Diana van den Heuvel told broadcaster NOS. ‘You can do this in Amsterdam but not in Barneveld,’ said another.

The council says that the neighbourhood is on a popular bat route and that by law it has to take steps to protect the animals. ‘As a local authority, we have to comply with the rules,’ a spokesman told local broadcaster Omroep Gelderland.

Last year, researchers at the Netherlands Institute of Ecology said that bats eyes are too sensitive to blue and ultraviolet light, but have less problem with orange and red lights.

Their report concluded that: ‘in order to limit the negative impact of light at night on bats, white and green light should be avoided in or close to natural habitats, but red lights may be used if illumination is needed.’

The council says it is now in talks with nature organisations to see if there is an alternative.