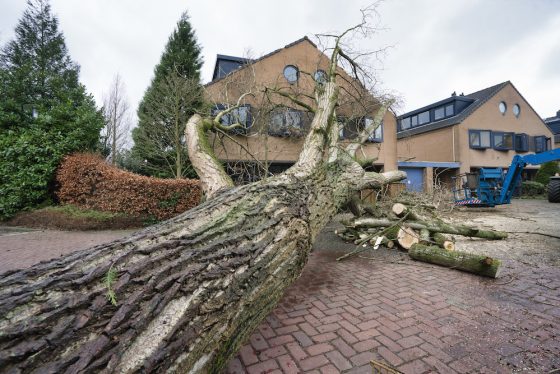 Wednesday’s storm has led to widespread disruption on the roads, on the railways and at airports. Some 252 flights to and from Amsterdam’s Schiphol airport were cancelled because of the strong winds.

All five big Dutch storm surge barriers were closed because of the strong winds and high water. It is the first time that all five barriers have been closed at the same time, the transport ministry said.

Crowds, and government officials, turned out to witness the closure of the Maeslant storm barrier for the first time since 2007. The barrier cuts Rotterdam port off from the sea.

In Amsterdam, broadcaster AT5 said the Zeeburger tunnel will remain closed until at least Thursday morning. It was shut after the lid of a container blew off a lorry, damaging the roof, on Wednesday morning.

According to website Alarmeringen.nl, the emergency services have so far been called out to deal with storm damage and flash flooding around 1,000 times.