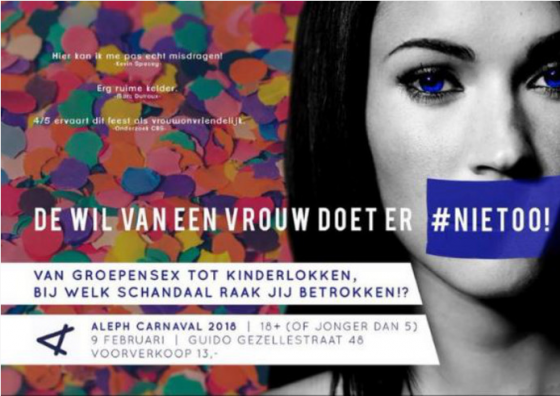 The slogan, which translates as ‘What women want is not important’, ends with a variation on the metoo# hashtag used in the campaign against sexual abuse.

The ESC has suspended all activities by Aleph while Eindhoven University of Technology has stopped its subsidy to the society.

‘The TU Eindhoven board is shocked by the offending and misogynous ‘party theme’ used by the chapter ‘Aleph’ of the Eindhoven Studenten Corps (ESC) fraternity. The board has suspended its financial support to the ESC and more sanctions will follow,’ the university said in a statement.

The invitation to the party in February was put on Facebook and featured a picture of a women with her mouth covered by a banner as if taped shut.

After branding ‘sexually inadmissible behaviour’ a ‘privilege’ of the Aleph members, the invitation goes on to say that the Aleph students will show the metoo# movement a thing or two. ‘We at Aleph know that women have no say over their own bodies during Carnaval. (..) From group sex to luring children, which scandal will you become involved in this year?’

‘This year Aleph has got it completely wrong with their Carnaval party theme,’ university spokesman Barend Pelgrim told broadcaster NOS. ‘Especially in times like these, when fraternities are under such close scrutiny by society, you just don’t do this sort of thing.’

According to Pilgrim, the university has never before received any complaints about either the fraternity or its affiliated chapter. The suspension will continue until the ESC, which has its own jurisdiction in these matters, has reached a decision.

Meanwhile comments on the events have ranged from ‘this is simply student banter’ to ‘deeply ingrained sexism in fraternities is very difficult to eradicate’.

Earlier this month Erasmus university in Rotterdam suspended its relationship with fraternity RSC/RVSC because of ‘unacceptable behaviour’ during the introduction of new members while Utrecht University broke off contact with fraternity UVSV for several incidents shown by an undercover television programme.

Groningen University stopped the grants for some members of student fraternity Vindicat after a number of incidents, one of which involved a student being stamped on the head during a hazing.