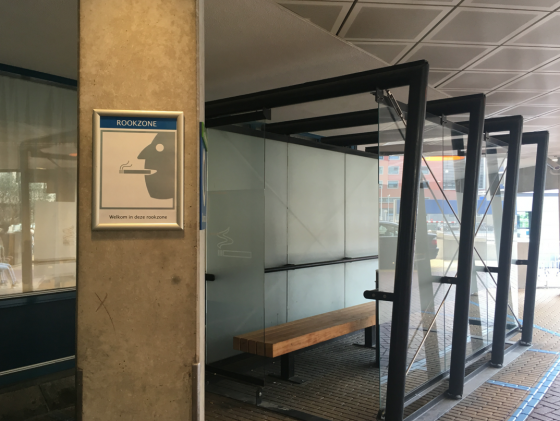 The smoking zone at the VU teaching hospital

A 25-year-old ‘healthy’ woman who has smoked since the age of 15 is the latest person to attempt to sue the big tobacco companies operating in the Netherlands for causing her serious physical harm.

Charlotte Pelt says she has been addicted to smoking for 10 years and that this is not her fault because ‘addiction is an illness,’ the AD reported on Friday.

‘It is not my fault that I am addicted,’ the law student said. ‘If you are young, you are not concerned about what it is doing to you. I started at a school party when I was 14 or 15. Lots of older pupils were already smokers… the tobacco industry wants to make people addicted to earn money.’

The mass action law suit aims to prove that the big tobacco firms have deliberately tried to get people addicted as quickly as possible – which is a criminal act.

It was launched in 2016 by lawyer Benedicte Ficq and cancer victim Anne Marie van Veen, who argue that tobacco firms have lied to smokers about the damaging side effects of their addiction. This is partly due to the use of cigarettes that give false readings in test results through the use of tiny ventilation holes in filters.

Dutch cancer charity KWF has also joined in the campaign.

‘Experts say that that addiction bears all the hallmarks of a disease,’ Ficq told the AD. ‘Charlotte Pelt is not healthy because she is addicted. Smokers seldom admit this, which makes her complaint all the more notable. Smokers usually agree with the tobacco industry line that smoking is a choice and that you can stop when you want to.’

The public prosecution department has not yet decided whether the tobacco firms have a case to answer to in the Netherlands. Although there have been several prosecutions for damages in the the US, the Dutch case would be the first involving a criminal prosecution.