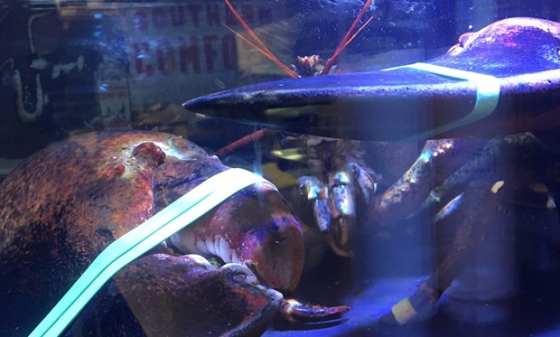 An 8.2 kilo lobster, auctioned off by a restaurant owner for charity, has been found a new home at the Dolfinarium amusement park in Harderwijk.

The lobster, thought to be about 80 years old and nicknamed Louis, was the biggest ever seen by Haarlem restaurant owner Fausto Albers, the AD reported on Wednesday.

Albers decided to auction the lobster off to the highest bidder who would then be able to enjoy a lobster-based meal. But customer Yvonne van Eeerden decided instead that Louis should not end up as dinner.

‘I thought it was a shame to eat something so big and which had lived for 80 years,’ she told the AD. ‘So I decided to save the lobster and support a good cause at the same time.’

Van Eerden, who paid €400 to free Louis, had originally hoped to return the lobster to Canada, where he probably came from. That proving impossible, he has now been found a new home in his own aquarium at the Dolfinarium.

The proceeds of the auction are going to the Ocean Clean-up Foundation which is attempting to remove plastic soup from the seas. According to local broadcaster NHTV, restaurant owner Albers has doubled Van Eerden’s donation.