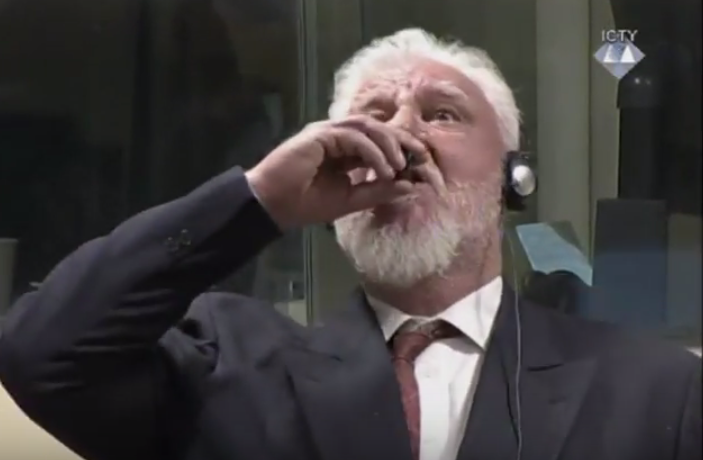 The remains of a ‘chemical substance that can cause death’ has been found in the small glass which convicted Croatian war criminal Slobodan Praljak drank from at the Yugoslavia tribunal in The Hague on Wednesday, the Dutch public prosecutor is quoted as saying.

Praljak died in hospital after drinking the poison when he was found guilty of war crimes and sentenced to 20 years in jail. The public prosecutor did not give any further details about the substance he took.

The ex-commander of Bosnian Croat forces, who took the poison in full view of the cameras, said he was not a criminal before drinking from a small class container. As the judge continued reading, he then said: ‘I have taken poison.’

According to broadcaster RTL Nieuws, the Dutch forensic institute (NFI) will carry out an autopsy on the body and toxicology research will shed more light on the actual cause of death.

The Dutch authorities are in charge of carrying out the investigation into Praljak’s suicide. How Praljak obtained the poison is so far a mystery. He has been held at a special unit in Scheveningen for tribunal suspects and is allowed free access to visitors and his legal team, broadcaster NOS said.

Wednesday’s session was the final one to be held at the court since it was established by the United Nations in 1993, two years after the end of the war.