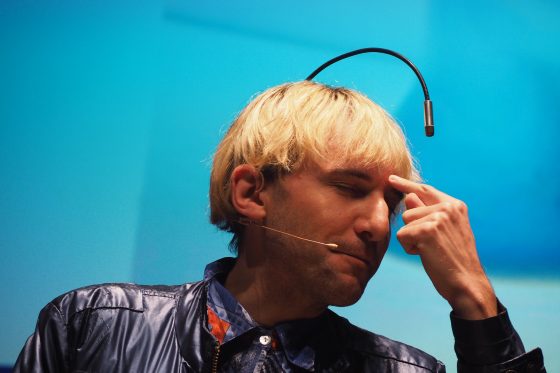 Cyborgs have arrived in the Netherlands – and they say they are here to save the planet.

On Thursday and Friday the regal Stadsgehoorzaal building in Leiden was transported to the future for the annual two-day Brave New World conference, featuring talks by a range of pioneers in high-tech science, art and industry – including the world’s first legally-recognised cyborg.

Day one saw cybernetic activist Neil Harbisson present on how he used technology to circumvent his colourblindness by fusing a sensor into his skull that allows him to hear colour as sound – even picking up ultraviolet and infrared lightwaves invisible to the human eye.

The 33-year-old told the assembled 200-strong crowd the result was life-changing – every supermarket run became like ‘visiting a nightclub’, he began dressing in colours that sounded right for his mood, and started appreciating art in a whole new way.

He successfully fought to have the antenna, which pokes out over his head like a reading light, included in his British passport photo and thus officially recognised as part of his person.

Harbisson and fellow cyborg Moon Ribas, who are connected by vibrating ‘transdental’ teeth implants that allow them to communicate in morse code, together spoke of the possibility for cybernetics to transform how humans relate to nature.

‘For thousands of years our species has been changing our planet to survive, what we suggest is to change ourselves in order to survive,’ Harbisson said.

To reduce humanity’s environmental footprint he envisions developing night vision in human eyes instead of artificially lighting cities, and using technology to internally regulate our body temperatures instead of wasting energy on heating and cooling our environments.

British designer Daisy Ginsberg followed on a similar theme, presenting on the prospect of biologically engineering new artificial creatures that help nature, such as a self-inflating fungus that detects tree disease, and a slug that would neutralise acidic soils harmed by pollution.

‘You could limit the lifespan of engineered organisms to control their release – (the slug) would be programmed to kill itself after 28-days,’ she said.

Amsterdam-based entrepreneur Kristian Esser spoke about his desire to use the conference to network and build support for a ‘Technolympics’ to complement the Paralympic and Olympic Games, featuring cybernetically-enhanced athletes who would promote such technology through their sporting prowess.

He told DutchNews.nl the Netherlands would likely win plenty of gold medals, citing the country’s recent victory in the World Solar Challenge race in Australia as an example of its strength in scientific competition.  Long-term he says the Technolympics would not be contested by countries.

‘I think in the future, Earth will be borderless – technology is so fluid,’ he said. ‘It is quite difficult to put technology into borders, but if you have to, of course Holland is going to win!’

Other speakers were more cautious about the prospect of transforming into man-machine hybrids.

University of Twente Professor of Ethics of Technology Phillip Brey spoke about his role leading the global SIENNA project, an ethical study on cybernetics, genomics and robots that involves interviews with 11,000 people across the world about their views.

‘We live in a society where people make stupid mistakes in their lives, a society where multinational corporations will take this idea and make it into this marketable commodity being pushed onto people. A society where some people can afford enhancements and others can’t.’

Attendees – an international mix of government bureaucrats, lawyers, business leaders and university students – were invited to participate in live online votes on the topics explored, with over 70% voting in favour of the idea of cybernetically enhancing themselves.

In addition to the talks, which covered topics ranging from AI to online democracy to space exploration to resurrecting extinct species, attendees strapped on headsets to explore Virtual Reality films, and participated in a range of workshops that merged art with technology.

Belgian artist Frederik De Wilde opened the conference by lamenting the ‘numb’ feeling brought on by rapid technological advancement that sees new forms of cryptocurrencies every year, the Internet of Things gradually infiltrating every corner of our lives and even newly-developed AI that can now guess what humans are thinking by reading their brainwaves.

‘The 21st century is very confusing,’ he said.