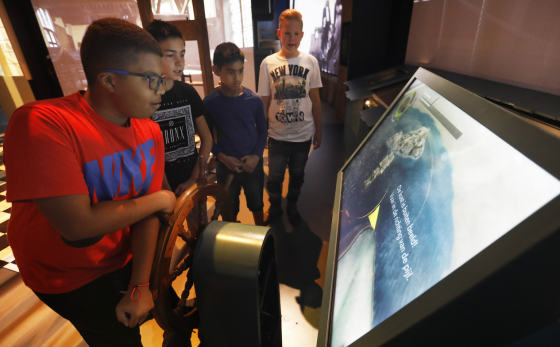 The new section of the museum will be interactive: Photo: Open Air Museum, Arnhem

The oldest skeleton ever found in the Netherlands is going on show for the first time at the open air museum in Arnhem as part of an exhibition about the history of the Lowlands.

The skeleton belongs to a 60 year-old woman who lived around 7,500 years ago and who had several children.

It was dug up in 1997 during work on the Betuwe railway line and was named Trijntje, a play of words on the name Trijntje and treintje (train). Trijntje represents the first of the ten periods in the Canon van Nederland, a division of Dutch history which was  drawn up in 2006 to aid history education in schools.

Historian Leendert Louwe Kooijmans told broadcaster NOS Trijntje’s bones are remarkably well-preserved. ‘In sand our bones turn to dust within a thousand years. But in bog and clay, where we found Trijntje, bones aren’t affected by oxygen. The more fragile bones are lost but her legs and skull have survived very well,’ he said.

The museum has turned the Canon into an interactive exhibition highlighting the highs and lows of Dutch history with artifacts from all periods.