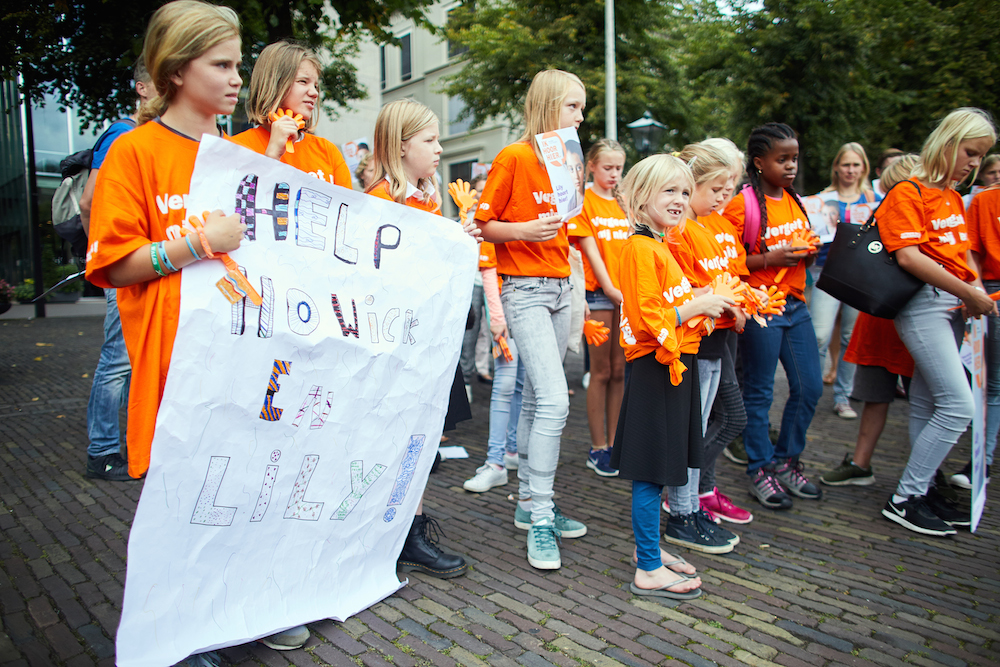 Children protesting about the deportations on Friday. Photo: Phil Nijhuis via HH

Two children who have lived in the Netherlands for nine years but face deportation to Armenia have gone into hiding while their mother is deported, broadcaster NOS said on Monday.

Armina Hambartsjumian, the mother of Lily (11) and Howick (12), was picked up at her home at a refugee centre in Amersfoort last week and was put on a flight to Paris on Monday, Defence for Children said. She will then be put on another plane to the Armenian capital Jerevan.

‘We have never before come across a case in which a mother is deported while the children remain in the Netherlands,’ Defence for Children said. The children were born in Russia and have never been to Armenia. Nor do they speak the language.

The children were not at home when their mother was picked up and their whereabouts are unknown. She has also refused to say where they are, NOS said.

Last Friday, judges in The Hague ruled that the family can be deported because the children do not qualify for the child amnesty introduced by the outgoing government in 2012. In order to qualify, children must have become rooted in the Netherlands and their families must have cooperated with attempts to deport them.

In addition, the fact that the mother has been separated from her children is her own fault, the court said.

On Friday, friends of the children made a last-ditch appeal to junior justice minister Klaas Dijkhoff for clemency. Supporters of the family say they should be allowed to stay while the coalition negotiations are ongoing. A chance in the amnesty rules are thought to be one of the topics up for discussion.

ChristenUnie and D66 are both part of the coalition talks and the two parties were involved with efforts to relax the rules earlier. ‘I am aware of the situation, but giving a reaction would not be in the children’s interests, ChristenUnie MP Joel Voordewind told Trouw.

Only 4% of the 3,000 application under the child amnesty rules have been successful.

The children’s ombudsman Margrite Kalverboar has described the deportation as a scandal and says the amnesty rules need to be changed.

The mother, Armina Hambartsjumian, told NOS last week she does not know how she will manage in Armenia. Despite having Armenian nationality, she was born in Azerbaijan and came to the Netherlands via Russia.