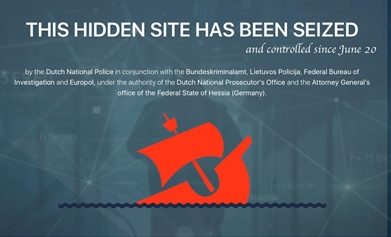 A Dutch police operation to shut down one of the largest ‘dark web’ marketplaces has had a tangible effect on illegal online dealing, according to new research.

Traders have had to seek out new marketplaces after police took over the Hansa forum on June 20 and kept it going for a month, gathering information about transactions, before winding it up and intercepting hundreds of deliveries.

Research centre TNO analysed 195 new accounts set up on Dream Market, currently the largest anonymous marketplace, after Hansa was taken offline. Since then Dream Market’s total membership has grown by one-third to around 17,500 accounts.

Many of the traders who migrated from Hansa started up under new usernames, even though business on the dark web relies heavily on word-of-mouth reputation and trusted names because of the high risk of fraud and blackmail. Dark web marketplaces are used to sell a range of goods including drugs, weapons and stolen credit cards.

Others retained the same name but changed their PGP key, a unique code that is used to communicate with other marketplace users. Only 12 arrivals from Hansa retained both their former username and PGP key.

‘It’s comparable to a star-rated restaurant that suddenly and without notice changes its name, premises, website and telephone number: the customers won’t come back until it has built up a new reputation,’ said TNO in a statement.

TNO said initial findings indicated the takeover of Hansa was a successful development in the fight against internet-based crime. ‘We will have to wait and see if the effects of this innovative intervention remain in the long term, but so far the effects have been considerable when set against earlier Dark Web interventions.’

The takeover of Hansa was carried out in collaboration with overseas criminal investigation agencies such as the FBI. Dutch police acquired the access codes to the site when two of its administrators were arrested in Germany, and transferred its infrastructure from its Lithuanian base to servers in the Netherlands.

Wilbert Paulissen, head of the police national investigation division, said: ‘We wanted to show that even in the anonymous environment of the dark web the police can play a part.’