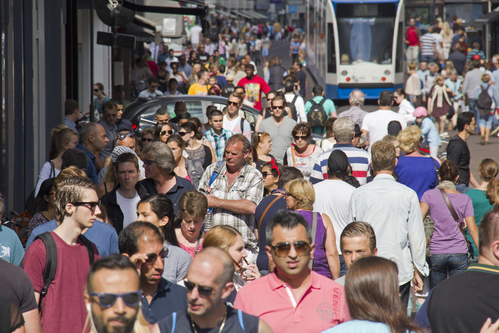 Amsterdam is going to take steps to better protect busy and internationally-important parts of the city from a terrorist attack in the wake of Barcelona and Turku, the city’s mayor Eberhard van der Laan has told the city council.

The entrances to the Kalverstraat, the busy pedestrian shopping street in the heart of the old city, is a prime example of a location where security measures would be taken, the mayor said, in a reversal of the city’s position last week.

The mayor did not name any other precise location or say what form the security measures would take, but said they would be determined in the coming weeks.

‘Attacks abroad show that terrorists will strike at every imaginable place, at any moment and in dozens of different ways,’ the mayor said.

‘This does not mean that there is concrete information about an attack,’ he said. ‘The measures fit within the current, substantial threat level.’ In addition, the measures will not be such that they paralyse the city, and an attack can never be ruled out altogether, he said.

The public prosecution department, police and city officials are to meet retailers, people running tourist attractions and other city businesses to discuss the next steps.

The Netherlands has so far avoided the sort of attacks witnessed in other European countries, although several people have been jailed for plotting to take part in terrorism.

Meanwhile, research by DVJ Insight on behalf of RTL Nieuws has found that 40% of the Dutch would like to see more concrete blocks placed around their cities. This rises to 57% among the over 65s.

The research also showed just 6% of the Dutch feel unsafe while out shopping. Again the over 65s are more likely to worry about an attack.

Terrorism expert Edwin Bakker told RTL Nieuws that concrete blocks and similar measures do not help. ‘People always find a place where there are no blocks,’ he said.