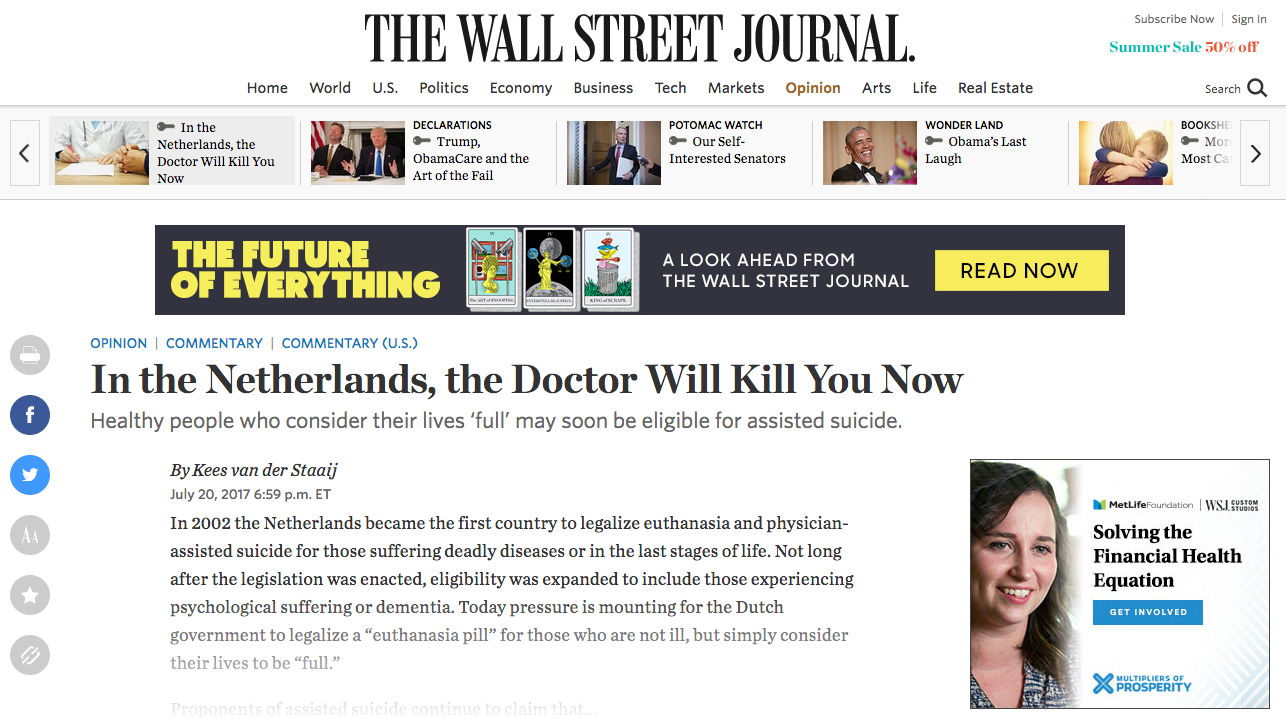 The Wall Street Journal has published an article by Kees van der Staaij, leader of the fundamentalist Dutch Protestant party SGP, headlined ‘In the Netherlands, the Doctor Will Kill You Now.’

In the article, which is behind a paywall, Van der Staaij makes a plea for people in other countries to speak out against euthanasia and the way the boundaries of the law are being stretched in the Netherlands.

The Netherlands legalised euthanasia in 2002 for those suffering deadly diseases or in the last stages of life, Van der Staaij writes.

‘Not long after the legislation was enacted, eligibility was expanded to include those experiencing psychological suffering or dementia. Today pressure is mounting on the Dutch government to legalise a euthanasia pill for those who are not ill, but simply consider their lives to be ‘full’.

Van der Staaij is referring to draft legislation proposed by potential coalition partner D66, which wants to introduce assisted suicide for people who consider their lives to be complete. The measure, which is opposed by many doctors, is likely to be central in the ongoing coalition formation talks.

In the article, Van der Staaij goes on to refer to several controversial euthanasia cases in the Netherlands.

The article ends with a call to action. ‘The Dutch government often speaks out when human rights are under pressure in other countries,’ writes Van der Staaij. ‘Now the fundamental right to life is under pressure in the Netherlands, it is time for others to speak out against Dutch euthanasia practices.’

According to the Volkskrant, the Wall Street Journal describes Van der Staaij as an MP but does not mention that he is a member of the SGP.

Van der Staaij says on the party website that he is thankful for being given such a platform in the US. ‘We want to show that the so-called ‘strong boundaries’ [around euthanasia] do not exist,’ he said. ‘The Netherlands is evidence of this. What was considered unthinkable by pro and anti campaigners 10 to 15 years ago has now become a reality… this is an alarm.’

More articles in other papers are planned and the party has appealed on its website for translators into German, Spanish and French.

The Staatkundig Gereformeerde Partij is the most orthodox of Holland’s fringe Christian parties and has three seats in the 150-member parliament.

The party believes that the country should be governed ‘entirely on the basis of the ordinances of God as revealed in the Holy Scriptures’. The SGP does not believe women should play an active role in politics and is also against homosexual rights, abortion and euthanasia.