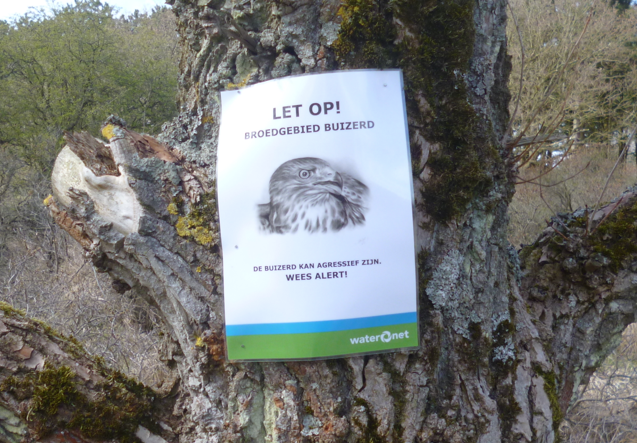 This warning about buzzards was placed in the Haarlem dune area last year. Photo: DutchNews.nl

A regional park organisation in Zuid-Holland has closed a popular wooded area near Lisse to the public because several people have been attacked by buzzards.

The Keukenhofbosch, close to the popular tulip park, is home to a breeding pair and several people have been left with bloody injuries, a forestry worker from Het Zuid-Hollands Landschap told news agency ANP.

Reports about the buzzards’ aggressive behaviour were first recorded several weeks ago. ‘They attack people who come to close or enter their territory,’ the spokesman said. ‘Sometimes they pretend to attack but some people have actually been pecked, resulting in nasty head wounds.’

The young buzzards will likely leave the nest within six weeks or so, and then the wood can be reopened to the public.

The Lisse buzzards are not the only ones causing problems this breeding season. In Drenthe, cyclist Theo Rook told broadcaster NOS he had been attacked by a buzzard four times within a week while out cycling.

He recorded one of the attacks with a mini camera mounted on his helmet.