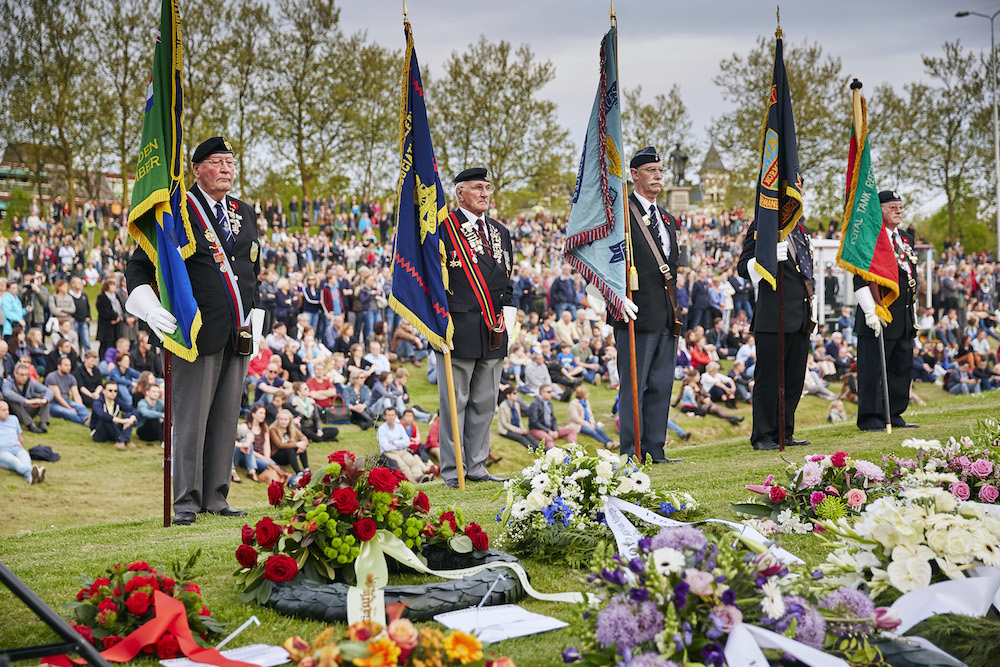 Veterans at the Remembrance Day ceremony in Nijmegen in 2015. Photo: Phil Nijhuis / HH

On May 4 the Netherlands remembers its Second World War dead, and the victims of war and peace missions everywhere. Today’s events will culminate in two minutes silence at 8pm, when public transport stops and the bells toll nationwide.

Remembrance Day always generates discussion in the Netherlands, and this year is no different.

This year’s hot potato is an initiative to remember 3,000 refugees who died trying to make their way to safety in Europe by placing 3,000 white paper crosses on Amsterdam’s Rembrandtplein. The initiative was cancelled at the last minute, following a wave of criticism, not least from the influential Israel Information and Documentation Centre CIDI, which called the plan ‘a watering down’ of what Remembrance Day is about.

Another Remembrance Day, another polemic, writes Trouw’s Sylvain Ephimenco in a reaction. ‘Should we still remember the dead of 75 years ago in the age of the smartphone? Or file past the graves of German soldiers? And should the asylum seekers who drowned in the sea be linked to the Dutch victims of that long-ago war?’. Ephimenco wearily concurs with Nieuw Israëlitisch Weekblad editor Esther Voet who tweeted that she ‘longed to have a Remembrance Day unmarred by controversy’.

Jan Kuitenbrouwer in the Volkskrant has a go at CIDI and the Comité 4&5 Mei who, he says are themselves responsible for watering down the event, quoting acting Comité chairman Jaap Smit who said: ‘If you remember everyone you end up by remembering no one.’ ‘Well quite,’ Kuitenbrouwer writes, ‘so who are we remembering exactly?’

‘The 102,000 Dutch Jews, did they die to defend our freedom? No. The horrendous thing about the Shoah is that the Jews died for no reason at all. To honour them or thank them for whatever sacrifice is in fact to insult them,’ he writes. ‘Then came the Dutch military intervention in Indonesia in 1947. My father was there and came back but many of his platoon didn’t. Why did they die? Freedom? The freedom to keep slaves, rob a country of its natural resources and oppress a people?’

‘If every Dutch war dead, whether he sabotaged a transport of Jews, burned down a Javanese village or ignored a bomb alarm is honoured as fallen in ‘the battle for good’ we are giving our national conscience an easy ride indeed. In that sense we are cherishing a moral masquerade on May 4,’ Kuitenbrouwer concludes.

Bernd Timmerman in the Postonline writes that ‘a remembrance ceremony for refugees is a no more than a quest for publicity’, and inappropriate on May 4, ‘a day when we are commemorating the Dutch victims of the Second World War and those of later conflicts. You could say that June 20, which was designated by the United Nations as a day on which to highlight the plight of refugees then and now, would be more appropriate,’ he said.

Bert Wagendorp in the Volkskrant chronicles the history of who exactly is being remembered on Remembrance Day and says of the steady accumulation of groups included in the ceremonies over the years shows that even when the Dutch are remembering they are making compromises.

He quoted CIDI’s Hanna Luden who said ‘If we pile up all the suffering in the world we no longer know what we are doing and we end up by doing nothing.’

‘That is true too and as far as I’m concerned this is a clearer truth… It’s nice to keep things clear and not bury May 4 under the world’s suffering,’ Wagendorp writes.

Remembrance Day events are taking place all over the country. A programme of tonight’s ceremony can be found here. On Friday the Netherlands will celebrate Liberation Day.