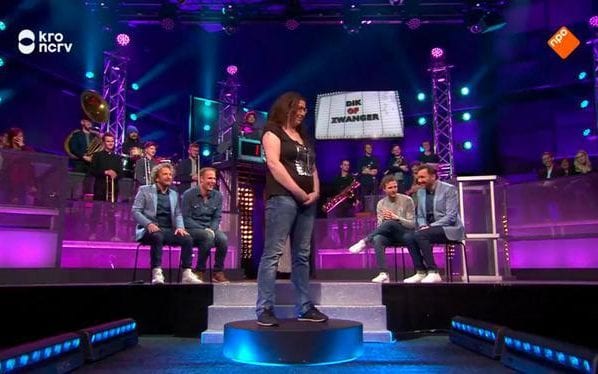 Broadcaster KRO-NCRV has scrapped part of a television game show in which men try to determine if a woman is overweight or pregnant.

The section of the show, Neem je zwemspullen mee (Bring your bathing suit) called Fat or Pregnant? involved a woman standing on a rotating platform while four men try to determine if she is has eaten too much or is pregnant.

The programme caused a wave of protests on social media and Buzzfeed and hit the headlines in Britain and the US.

KRO-NCRV initially countered by saying the section had not been criticised during the pilot stage and that the programme was popular among viewers.

But in a statement KRO-NCRV director Yvonne de Haan apologised. ‘The section Fat or Pregnant? was meant to show appearances can deceive.

‘In this round we feature lots of prejudices based on what people look like. Is he a criminal or a business man?, or is he Dutch or German? Putting things in a satirical setting is a way of laughing at prejudice. But we did it I a way that hurt people. That was never the intention and we regret it,’ De Haan said.