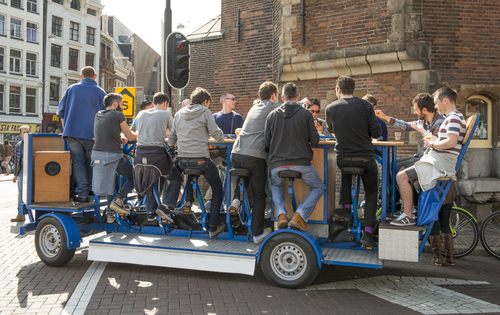 The beer bikes beloved by tourists on stag weekends will be banned from the centre of Amsterdam from November, the city’s mayor Eberhard van de Laan has decided.

The ban had been due to come in this January but was delayed following a legal challenge from the bike owners.

The bikes, propelled by increasingly merry tourists, have become a major nuisance to locals and clog up traffic, the council claims.

They said the council had failed to provide a corridor for the beer bikes to go from the centre to parts of the city where the ban would not be applied. This would make it impossible for the beer bike companies, which usually store their vehicles in the centre, to do their jobs.

Van der Laan said a corridor will still not be on the cards because the city centre is busy enough as it is. The new deadline gives companies enough time to find alternative locations to store their bikes, he said.

‘This is as close to the decision of the court and the interests of the beer bike companies as possible. The ultimate goal remains to ban the beer bikes from the centre,’ the Parool quotes Van der Laan as saying.