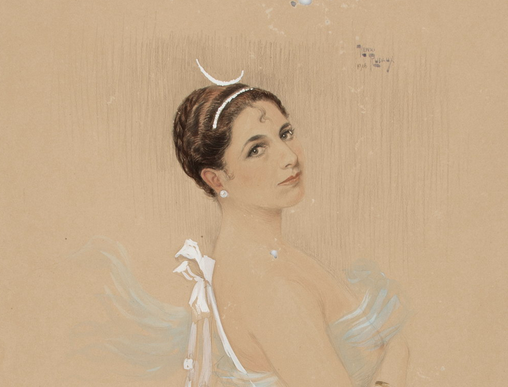 A collection of personal letters and mementos belonging to Mata Hari, the Netherlands’ most glamorous exotic dancer and spy, went under the hammer this week fetching €45,000. Among her things: a poignant baby book of her young son who died at three, writes broadcaster NOS.

It is 100 years since Mata Hari, born Marghareta Zelle in Leeuwarden in 1876, was executed in France. The collection – many letters, furniture, a wedding menu, photos and baby books of her children, and a portrait of Zelle – had been in the possession of relatives of Zelle’s one time husband Rudolph MacLeod, one of whom decided the time had come to sell.

According to auctioneer Julia de Jong of auction house De Zwaan in Amsterdam, the collection ‘brings back Marghareta rather than Mata Hari’ and nothing more so than the baby book of her son Norman.

‘Norman is a precocious little man and his smiles bring sunshine to the house’, it reads. The entries end at his death at three with the rest of the pages remaining a blank.

Among the mementos are two photographs kept by her husband of his, by then, ex-wife as Mata Hari the exotic dancer. Written on the back of one of them, a curt ‘executed 15-10-1917’ reveals the fate of this extraordinary woman.

It was during her time in the former Dutch colony that Zelle became interested in the local dance culture, something that stood her in good stead when some years later she left her husband and became a successful exotic dancer in Paris.

Mata Hari travelled a great deal during her career. Her daughter Non stayed behind in Amsterdam but was never far from her mother’s mind. The crown-shaped brooch in the collection was given to a German officer but he had to promise to give to her daughter. By the time it arrived Non had died at age 19.

With the coming of World War I, her frequent movements and contacts in military circles in Berlin were beginning to draw the attention of the French authorities and eventually Zelle was accused of spying for the Germans. It didn’t help that her Mata Hari persona portrayed her as a femme fatale who could get any army official to divulge military secrets at the drop of a veil.

Zelle always denied her travels were anything other than artistic engagements and some of the French charges against her were later shown to be trumped up. But later documents confirm she started working for the Germans in 1915 under code name H-21.

Marghareta Zelle was executed in Vincennes in 1917. Reactions at time show she was condemned as much for being a spy as for being a ‘loose’ woman. ‘Mata Hari lived and died an adventurer. The world of pleasure that she sought in a rush of sensuous madness became her downfall’, one paper wrote.

Part of the collection – letters from Macleod to his daughter, locks of the children’s hair and ribbons and dried flowers from their graves – were given to Frisian archive Tresoar in Leeuwarden. The portrait, of a dreamy looking and very beautiful Zelle painted by a French lover, was sold for €6,000.