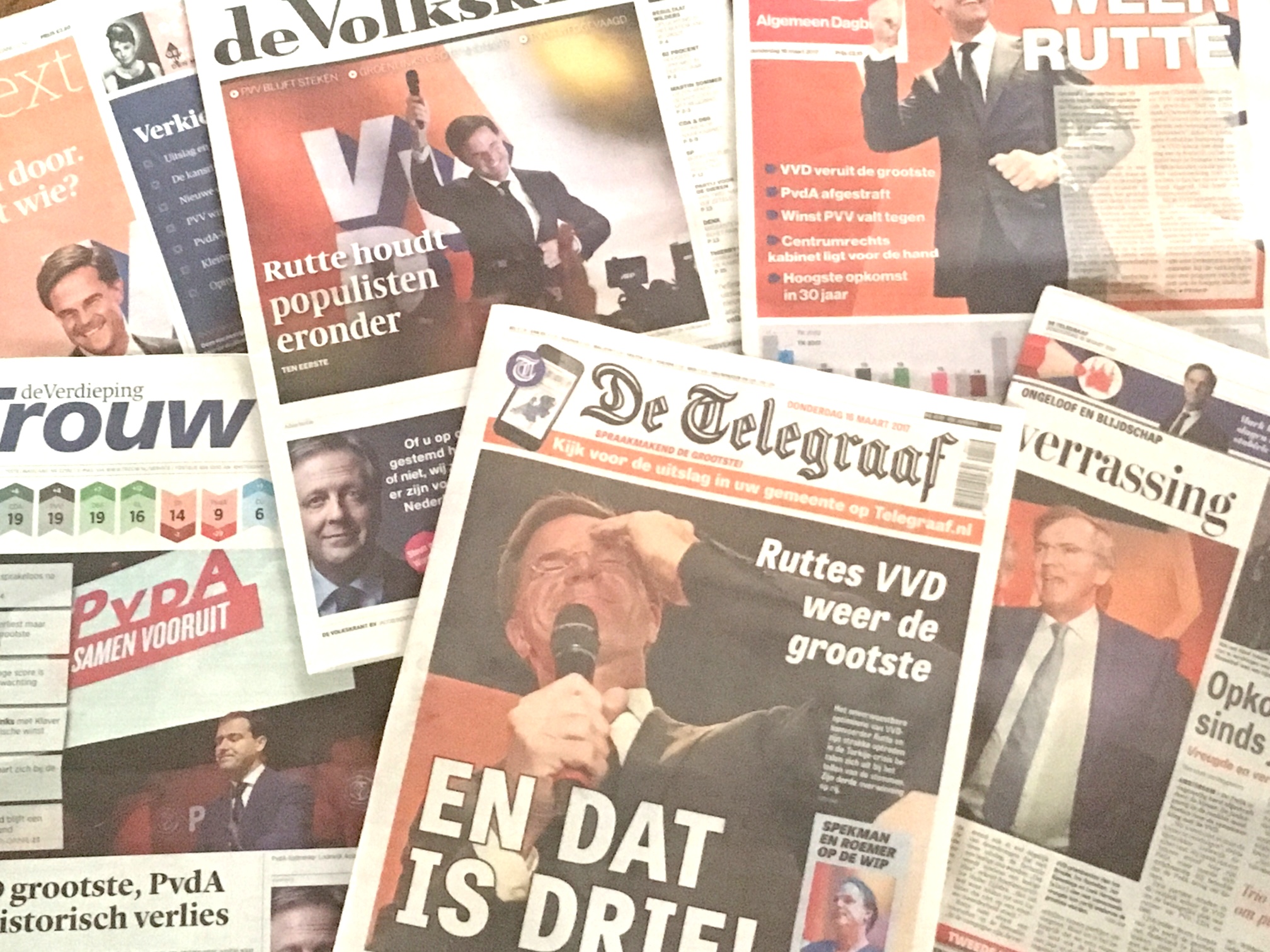 A beaming Mark Rutte features on the front page of all the Dutch papers on Thursday morning, with the exception of Trouw, which carries a dejected Lodewijk Asscher.

‘The centre wins’ the NRC headlines its election result analysis. ‘The Netherlands has woken up ‘a normal country’, in the words of VVD leader Mark Rutte,’ the paper writes. There has been no ‘populist revolt’, only a ‘couple of hammer blows’.

Among the many parties and winners the NRC detects a clear trend: the centre dominates. ‘The patriotic spring announced by PVV leader Wilders has turned out to be a mirage. The Netherlands remains what it has essentially been for decades: many-facetted and largely moderate.’

The paper calls the loss suffered by former coalition party Labour party a ‘dramatic’ one. ‘Once a pillar of the post-war welfare state the party is now in an existential crisis’, the paper writes.

The ten seat loss (it is actually eight, DN) for the VVD is another sign that being a governing party with a ‘dream budget’ doesn’t necessarily mean electoral gain. ‘Voters are motivated by more than economic success’, the NRC writes.

Although Jesse Klaver’s GroenLinks did very well, a new coalition is likely to be made up of VVD, D66 and CDA and some of the smaller parties, at which point things may well get complicated. But it’s a complicated world and some of its complications, i.e. the diplomatic row with Turkey, have come uncomfortably close and the country needs a stable government as soon as possible, the paper concludes.

‘The Dutch domino tile hasn’t tumbled’ the Financieele Dagblad writes in its editorial. It appears most voters weren’t led by anger and although Labour was severely punished and the VVD won fewer seats compared to 2012 the ‘discontent is much less prevalent than many a pessimist had predicted,’ the FD writes.

Nevertheless the formation will be a puzzle with at least four parties having to bury the hatchet and compromise to form a government. Concessions may disappoint voters but the wish to please everybody must not lead to loosening the economic reins, a temptation now that the economy is improving, the paper warns.

The formation will probably take time, the FD predicts. ‘All parties will want to see their preferences in a new government agreement. The future coalition will not be able to avoid tackling the postponed or failed reforms of Rutte II: the modernisation of the labour market, the reform of the pension system and the tax system. And last but not least, an effective climate policy,’ the FD concludes.

‘The Netherlands wakes up a right-wing country this morning, with the VVD as the undisputed winner’, Trouw’s  headline reads. Not as right-wing as the polls predicted, but  ‘the parties that call themselves left wing only have a combined 37 seats, an all-time low in a trend that was started at turn of the century,’ the paper writes.

The main conclusion is that ‘it doesn’t pay to be in the cabinet and Rutte was not rewarded a ‘prime ministerial bonus’ for his performance in his last cabinet, says Trouw Labour’s ‘knock-out’ is a bitter pill for the party and will force it to ‘look long and hard at its raison d’être.’

The second important conclusion, according to Trouw is that ‘the Netherlands has shown itself once again to be a country in which moderation is key. ‘Our society is not open to extremism. The PVV and its hostility to the system gained far fewer seats than the polls led us to be believe.’

The Volkskrant also predicts a complicated formation. But although the cabinet has been given ‘a chastisement of historic proportions’ Mark Rutte has established his reputation as ‘the man who halted the march of Brexit and the American elections in the Netherlands.’

‘With a little help form Ankara the VVD became the biggest party,’ Elsevier columnist Gerry van der List writes. Labour must now get rid of the people who failed to boost the party membership: ‘Asscher and Spekman need to go’, and while he is at it Van der List also predicts the imminent demise of Emile Roemer as SP leader.

The Telegraaf headlines its editorial ‘trust’. Much has been said about the growing gulf between politicians and the population at large but the high turnout on Wednesday showed that the Dutch are still closely involved in government.

After four years of cuts, party leaders must work carefully to ensure that they do not set aside voter interests in their efforts to form a coalition too quickly.

It is now crucial that political leaders do not shame that trust, the paper concludes.

The foreign press, who were in the Netherlands en masse, have also interpreted the election results a defeat of populism. ‘Rutte is Europe’s hero for a night’, reads the headline in Die Welt.

CNN concludes that extremism has ‘failed at the first hurdle’ while the BBC captions a picture of a smiling Rutte with ‘prime minister Rutte celebrates the rejection of populism’.

The Guardian has proclaimed GroenLinks, led by ‘the Jessiah’ as the big winner of the Dutch elections. The Turkish paper Daily Sabah, which had described Geert Wilders as ‘islamophobe’ and ‘xenophobe’, said his performance was ‘unexpectedly disappointing’ in the wake of the diplomatic row between Turkey and the Netherlands.