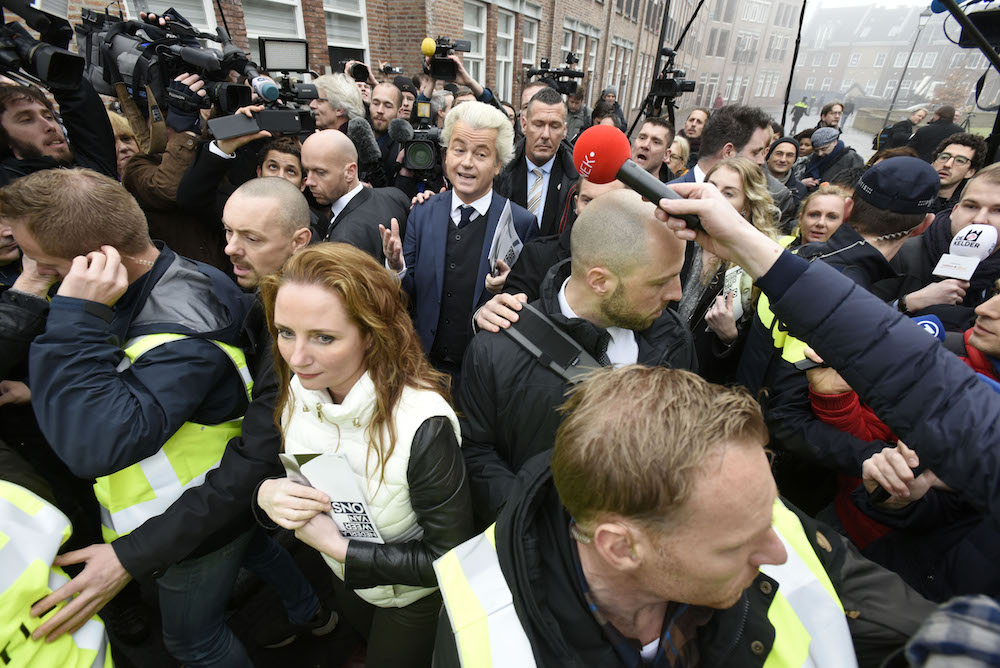 In a scrum of more press than supporters, Geert Wilders launched the far-right PVV campaign protesting about Moroccan ‘scum’ in a town near Rotterdam on Saturday.

For around an hour Wilders – complete with security guards, police, sniffer dogs, several protesters and reporters from all over the world – offered hands and selfies to 100 or so supporters.

In the first day of campaigning before March 15 general elections, Wilders’ platinum hair bobbed in and out of security-hemmed supporters and PVV candidates in the party’s stronghold of Spijkenisse.

Although Wilders was last year convicted of insulting Moroccans and inciting racial discrimination – a judgement he is appealing – he still had strong words for the Dutch ethnic minority he describes as a nationality rather than a race.

‘Look at the Islamisation of our country,’ he told the press, in a speech he had memorised in both Dutch and English. ‘If a Dutch person drives 5km too fast, you will be fined within a minute. But the Moroccan scum in the Netherlands – not all are scum, but there is a lot of scum – make the streets unsafe, mostly young people, and they are not taken seriously.’

His party, currently top of the polls but with a narrowing lead on the ruling VVD Liberals, has a one-page manifesto to make ‘the Netherlands ours again’ including closing the borders and asylum centres, banning mosques and leaving the EU, plus populist policies such as reducing rents and getting rid of the health insurance excess. It has not been independently costed.

It was a rare public appearance for Wilders, who regularly tweets and posts Facebook messages and videos to his supporters but has lived for more than a decade with 24-hour protection. During the national election campaign 2002, the Dutch anti-Islam politician Pim Fortuyn was murdered for his views.

In the market town, which has suffered from higher than average unemployment, many local people welcomed Wilders. Frank Kleijwegt, 53, shopping nearby, said: ‘[Pim] Fortuyn was the man. Wilders goes further than him, but he has a point. He talks about the things a lot of people don’t want to talk about, because it’s not polite. Trust in politics is down. That’s why people vote for him.’

Menno Krikken, 32, a blue-haired civil servant who lives in Spijkenisse, and convinced his purple-haired, GroenLinks-supporting girlfriend to join him at the PVV rally said: ‘The man is a visionary. One in five people in this city votes for Mr Wilders. I like his standpoint on the European Union and against religious extremism. Mr Wilders is very outspoken and that’s why he was prosecuted. I don’t think he stepped over the line.’

Marianne Hopkins, a Dutch woman with an ethnic minority background, was delighted to shake the politician’s hand and said simply: ‘I think Mr Wilders is a pop star.’

The politician has been leading in the polls, ever since a spike in the numbers of asylum seekers at the end of 2015, inciting concern and bloody protests. With the PvdA Labour vote prediction collapsed, pollsters and political analyists say centrist politics are declining and the vote splintering across far more parties.

Mark Rutte, in his last prime minister’s press conference on Friday admitted that his government has not managed to share a message of increased national economic prosperity with everyone.

‘The crisis is behind us,’ he said. ‘But I want everyone to experience the fact that things are going better with the Netherlands in the coming years. There are still people who can’t find a job and people who feel they have personally paid the price of the crisis, and I feel responsible for them.’

Even though the PVV is currently predicted to win the largest party share – up to 27 seats, in the latest polls – all other parties have said they will not work with Wilders. The Netherlands faces a coalition of four or more parties.

Back at the rally, Stefan de Jong, 32 and a truck driver from Spijkenisse, said: ‘If that happens, it will be very bad as so many people support him. It puts democracy in danger.’

But several protesters holding up scribbled signs claimed quite the opposite.

One protester, holding a sheet saying ‘Wilders = extreme right elite’ said: ‘Wilders isn’t a man of the people but part of the elite. His message isn’t honest – he cannot make our society better or safer by shutting certain people out.’