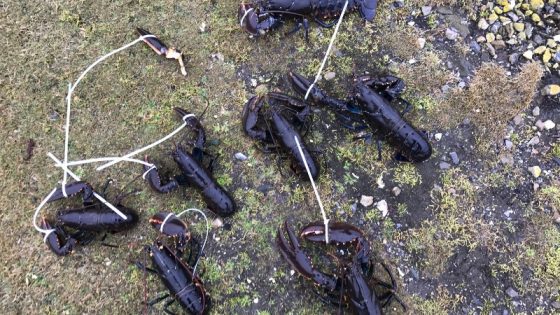 Some of the lobsters. Photo: Politie.nl

Two men, aged 48 and 34, have been fined on the Zuid-Holland delta island of Goeree-Overflakkee for illegally fishing for lobsters.

Police caught the men after a car owned by a potential poacher was spotted next to the Grevelingenmeer at Ouddorp on December 30. After watching the car for a time, they saw a man in a diving suit emerge from the water carrying a net with eight lobsters. Their claws had been tied together.

A short while later, a second man emerged in a diving suit. He denied that he was poaching but a net containing seven lobsters was found at the spot where he had been diving.

Both men were fined and their diving suits were confiscated. The lobsters were released back into the water.

Later the same day, police came across a group of three German nationals in a car with two cool boxes stuffed with lobsters and oysters. The men were given an on-the-spot fine of €600 and shell-fish and crustaceans were returned to the water, police said in a statement.