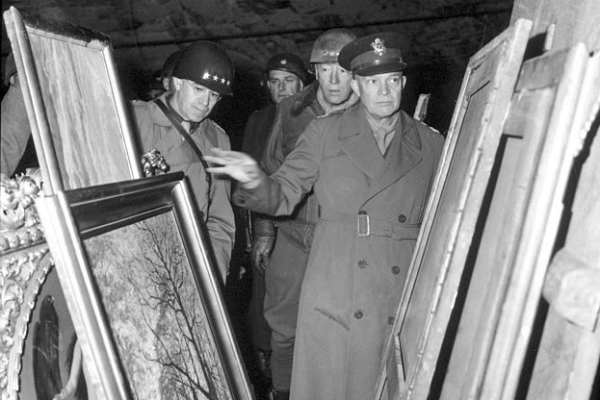 US generals inspect looted art at the end of the war. Photo: Wikipedia

A website has been launched to help people track down works of art that were stolen during the Second World War.

The site, Herkomst Gezocht or Origins Unknown, will allow users to search 14,000 documents containing details of works that went missing under the Nazi occupation.

Until now anyone trying to use the documents to identify missing artworks could only do so by hand, a laborious and time-consuming process. ‘Now everything is on the internet and you can use search terms,’ art expert Rudi Ekkart told NOS.

Paintings make up around half the total list, while another 1,000 items are sketches. Ceramics and furniture also feature strongly, alongside items of silver and musical instruments.

‘It’s not just interesting for researchers and art dealers,’ said Ekkart. ‘Anyone can see if their family’s name is in it. In many families people didn’t talk about the war, so people often don’t know if grandma or grandpa reported missing works of art.’