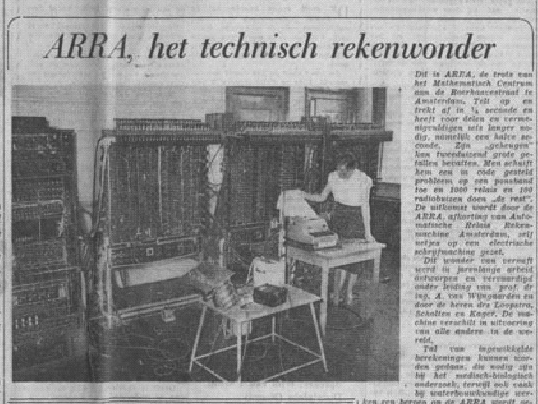 An amateur historian has found the last surviving parts of the first computer ever built in the Netherlands, according to the Volkskrant.

Erik Verhagen has discovered two key parts of the Automatische Relais Rekenmachine Amsterdam (Automatic Relay Calculating Machine Amsterdam) which was developed between 1948 and 1952 by Carel Scholten and Bram Loopstra.

The ARRA was long thought lost to history. ‘There was a good reason for that,’ says Verhagen. ‘At the launch in the summer of 1952 it only worked once, for a little bit. But since it never really worked it was scrapped and an ARRA II was built, which did work.’

The first ARRA took up a whole classroom and was operated from kitchen tables full of switches and buttons. Results were put on paper by a magnetically driven typewriter.

It was built from 1,200 relay switches and radio tubes that could store about 30 bits of information altogether. The ARRA could do 16 types of calculations, from adding up and subtracting to multiplying and dividing. It was the first step towards a whole series of experimental programmable calculators.

Verhagen found the only two remaining parts, two Siemens relays, in the possession of an anonymous collector. ‘The parts were just getting in the way at the institute, so someone took them home. It’s a shame to throw them away after working on it for years.’

The ARRA parts will now be be put on display at Amsterdam University’s centre for mathematics and computer science (CWI) in a special exhibition marking 100 years since the birth of Dutch computer pioneer Adriaan van Wijngaarden. The show, which is open to the public on request, also includes a World War II Enigma machine.

According to CWI computer scientist and household historian Paul Klint, the history of early Dutch computers is a forgotten subject. ‘The Netherlands played an important role, internationally too, but everything is either gathering dust or gets thrown away,’ he told the paper.