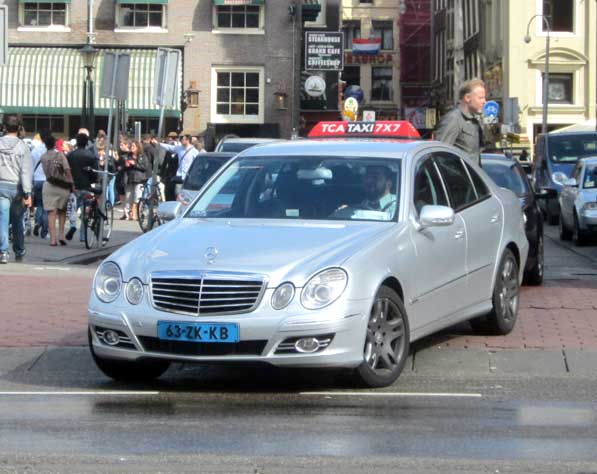 British singer Skin, from rock band Skunk Anansie, has criticised Schiphol airport for allowing travellers to be ‘harrassed’ by taxis touting for business rather than joining the official queue.

She has posted a video – viewed more than 142,000 times – of ‘official guys fighting dodgy guys’, all trying to persuade people arriving at the airport to take their taxi.

‘Now I’ve travelled the world and been to many scary airports but I have to say this is the worse![sic]’ she writes in the post. ‘How does a modern country like Holland with a huge international airport like Amsterdam allow this to happen????!!!’

She adds: ‘These guys in OFFICIAL TAXI vests told me I was waiting in the wrong queue and that another queue was faster, but then as I left the REAL, airport security told me that in fact my driver was not official and that they were taking me to the underground garage to meet the actual drivers!’

Schiphol airport told the Parool: ‘We are working with several parties such as the city and the gendarmerie to address this. It has improved, and we have extra guards. But there is a kind of cat-and-mouse game. Once security guards have gone, it starts again.’

Travellers hear alerts in the airport that they should travel with official taxis and there are stickers showing the route to this queue.

The row – unbeknownst to the British singer – is not necessarily about unlicensed taxis but competition between those who have bid to work at Schiphol and those who are ‘out of the loop’.

Earlier this year, the Parool reported that three taxi companies, ZCN, Willemsen-De Koning and BBF Schipholtaxi won a contract to offer services from Schiphol airport – but not other firms, TCA and Connexxion.

Such other licensed drivers can legally park on public land at the airport, but cannot join the official queue. But there have also been reports of drivers demanding €500 for a ride to Amsterdam – which normally costs some €40.