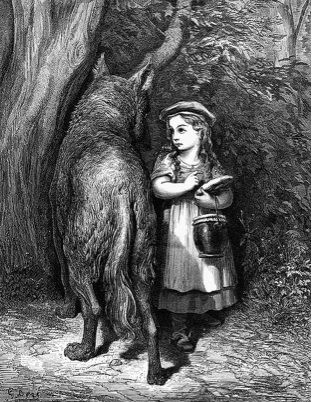 The big bad wolf isn’t as mean as he used to be, according to academics who analysed more than 400 Dutch versions of Little Red Riding Hood.

Ethnologists at Radboud University in Nijmegen studied the evolution of the classic children’s tale since the 17th century. Back then it was a morality tale designed to instruct young girls in the virtues of obedience and the dangers posed by two-legged beasts in disguise.

The researchers used computer analysis to compare 427 different renditions of the tale, noting the often small changes that came with each retelling. For instance, the bottle of wine that the girl takes to her sick grandmother is replaced by fruit juice as alcohol loses its medicinal status.

In early versions of the story, Little Red Riding Hood frequently meets a grisly end at the hands of the wolf, but as the centuries go by her chances of survival improve. Some older forms even have her eating her grandmother’s flesh.

The character of the wolf changes from ‘a wolf’ (in the days when real wolves roamed Europe’s countryside) to ‘the wolf’, an allegorical creature representing deviousness and greed. Red Riding Hood, in turn, becomes more independent and heroic, and increasingly gets the better of the wily wolf.

Early Dutch versions of the tale evolved from the French story written by Perrault, but in the 19th century Grimm’s fairy tales were translated from German and became the most popular source.

Ethnologist Folkert Karsdorp said the research showed how children’s fairy tales evolved through small, almost unnoticeable changes over time. ‘It’s a culturally evolutionary process,’ he told the Volkskrant. ‘When stories exist in our collective memory it limits how much radical change people can accept. Their reaction is that it’s not suitable. We see something similar in the Black Pete debate.’