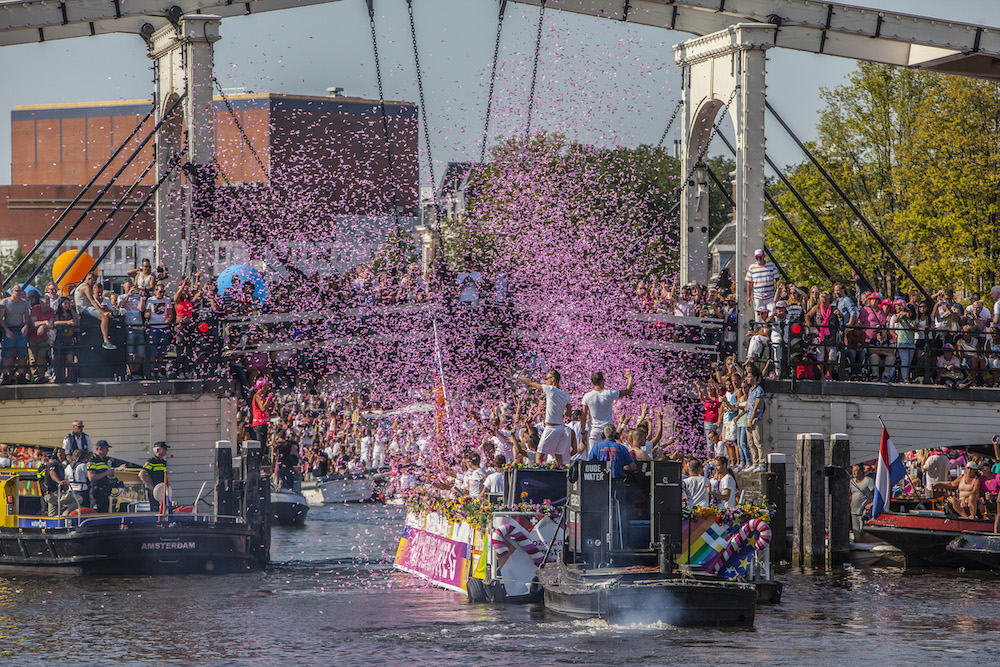 The canal parade in 2015. Photo: Amaury Miller via HH

Fifteen days of parties, debates, concerts and other events start in Amsterdam on Saturday as the Dutch capital hosts EuroPride 2016.

EuroPride, first held in 1991, takes place in a different European city every year and is being hosted by the Dutch capital in 2016 to mark 20 years of the Amsterdam Gay Pride organisation. This year the event has the motto ‘’join our freedom’.

Over 300 events will take place between July 23 and August 7, including Pink Saturday at the Vondelpark and a pro human rights concert on Dam Square this Sunday. The traditional canal boat parade on August 6 includes floats hosted by gay Moroccans, LGBT Jews and the police force, as well as the European Commission.

‘We will celebrate that freedom but at the same time continue the fight for equal rights in Europe,’ Lucien Spee, director of the Amsterdam Gay Pride organisation, told the festival’s magazine.

‘This will continue until we have the right to be who we are, to have families, to lead full lives and to develop the careers that we want, wherever we are until we are fully accepted and embraced with dignity by our families, neighbours and colleagues throughout Europe.’

Despite the Netherlands’ reputation for tolerance – the country was the first to legalise gay marriage for example – some 32% still consider two men kissing in public to be offensive, according to research published by the government’s socio-cultural think tank SCP in May.

Almost one in four people finds the sight of two women kissing to be offensive, while 12% find a heterosexual couple kissing in public to be objectionable.

Nevertheless, the percentage of people with an immigrant background who do not accept homosexuality and would be unhappy if their child was gay has gone down over the past eight years, the SCP figures show.

Despite this, there has been a reported rise in attacks on gay men and women over the past years, but, experts say, this may be partly due to an increased willingness to report hate crimes.

‘Tolerance has become part of the national myth, and it’s being instrumentalised by the right-wing party and the media. So nowadays you’ll hear a lot more about incidents between Muslim youths and gays because it serves the anti-immigration discourse,’ University of Amsterdam sociologist  Laurens Buijs told website Iamsterdam.com.

‘But it’s also because the LGBT arm of the Dutch police, the Roze in Blauw (‘Pink in Blue’), has done a fabulous job at fostering a trusting relationship with the community,’ he said.

Roze in Blauw spokeswoman Ellie Lust told the website: ‘We have lowered the threshold of tolerance for discrimination, and victims now come to us to report even verbal attacks. This has definitely affected the statistics.’