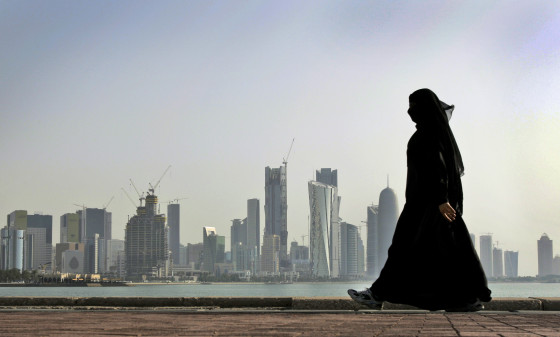 A Qatari woman walks in front of the city skyline in Doha. Photo: AP/Kamran Jebreili

A 22-year-old Dutch woman from Utrecht has been in jail in Qatar since March since reporting to police that she had been raped, Dutch media reported on Saturday.

The woman, named in the media as Laura, faces being charged with having sex outside marriage, which carries a jail term of up to three years

The Dutch foreign ministry confirmed on Saturday that Laura has been arrested but said she had not yet been charged with anything.

Laura had gone out dancing at the Crystal Lounge in the Doha Hotel, a popular hangout with foreign tourists where alcohol is permitted, the Telegraaf said. She was on holiday in Qatar with a friend called Lisa, her mother told the Telegraaf.

According to Laura’s family’s lawyer, she went to the police after waking up in a strange apartment and realising she had been raped. She thinks it likely her drink was drugged and had flashbacks of being taken from the hotel in a taxi by an Arab man, lawyer Brian Lokollo told Radio 1 news.

The man she claims attacked her has also been arrested. According to one newspaper report, he says that he paid Laura to have sex with him.

Dutch media say Laura is coming under considerable pressure from her alleged attacker’s family to marry the man, so that both would be let off without any charge.

‘I have recommended against this, not only because it would be an appalling thing to do, but I don’t know what the other consequences would be,’ Lokollo said.

A foreign ministry spokesman said an official had been in court with Laura and she had been provided with a list of lawyers but that she wanted to make her own arrangements. Another hearing will take place on Monday, the spokesman said.’Our main aim is to ensure a fair trial,’ he is quoted as saying.

MPs have urged foreign minister Bert Koenders to make a statement about the situation, in particular the role of the embassy in helping the woman and her family.

They also want answers on claims it took three weeks before anyone from the embassy visited Laura in jail.