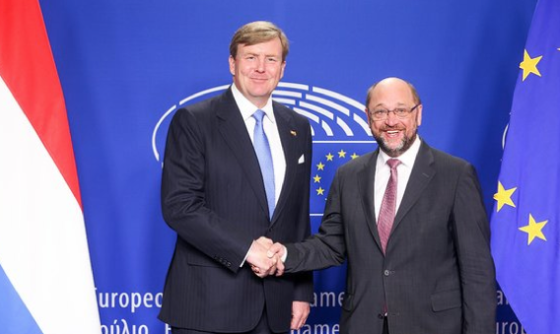 Dutch king Willem-Alexander has told the European parliament that the EU would not be complete ‘without the English rose’.

In an oblique reference to the forthcoming British referendum on EU membership, the king said in a speech: ‘Everyone’s input is essential. The European bouquet is not complete without the Spanish carnation, the French fleur-de-lys… the Dutch and the Hungarian tulip. And not without the English rose.’

While praising European ideals, the king said that for many Europeans, their own land is the important anchor, with their own history, traditions and customs. ‘But we should never forget how much we have to thank the broader European movement and the people and cultures around us,’ he said.

Nevertheless, the importance of the EU did not absolve the organisation of the obligation to be open to criticism and look at itself critically, the king said.

‘We often only take action on urgent community issues when things have gone so far that there is no alternative,’ he said.

He urged the European parliament to strengthen the EU by taking the wishes of all citizens into account. Terrorism and the refugee crisis are putting the union under pressure, and that makes a solid basis even more essential, the king said.

The king was addressing the European parliament as part of the Netherlands’ presidency of the EU which runs until the end of June.