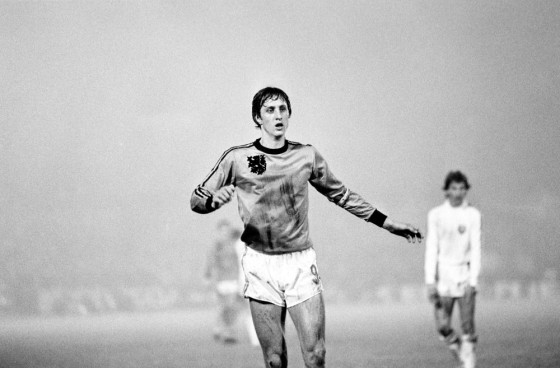 Tributes have been flooding in for Dutch football legend Johan Cruijff, who died from lung cancer on Thursday at the age of 68.

Michael van Praag, chairman of the Dutch football association KNVB, said: ‘We have lost our best footballer ever, our number 14 and a great football friend.’

‘We are broken. Johan took Dutch football to greater heights. The KNVB will be eternally grateful to him. And I am going to miss Johan, my friend, enormously.’

Prime minister Mark Rutte told reporters during a press conference that Cruijff was the Netherlands’ ‘most important ambassador’.

‘The whole world knew Johan Cruijff,’ Rutte said. ‘And through him, the whole world came to know the Netherlands and Dutch football… A lot of people come to my offices but never before has everyone wanted to be photographed with a visitor as they did with him.’

King Willem-Alexander said on Facebook the Netherlands has lost a unique sportsman. ‘He enriched our football and gave it a new face,’ the king said. ‘And he put his heart and soul into making sure the sport was open to everyone. He was an icon and part of all of us.’

Footballers too have been paying tribute to Cruijff. ‘My thoughts and love are with the friends and family of not just one of the best footballers in the history of the game but also one of the greatest men and nicest person you could meet … The game lost a true hero today,’ said former England international David Beckham on Instagram.

Johan Cruyff was a great player and coach. He leaves a very important legacy for our family of football. pic.twitter.com/b2VuTjDZuu

My first coach overseas, one of the best coaches I ever had. A very important man in my career. We had a great loss pic.twitter.com/4n5IgiJQ6f

“YOU were too great to ever be forgotten . . . ” R.I.P. Johan Cruijff My sincere condolences to… https://t.co/txpp8Ny9vS

Johan Cruijff died…. Lost for words The Greatest of All Time My Hero Thanks for all the memories pic.twitter.com/08AjTfJ7SD