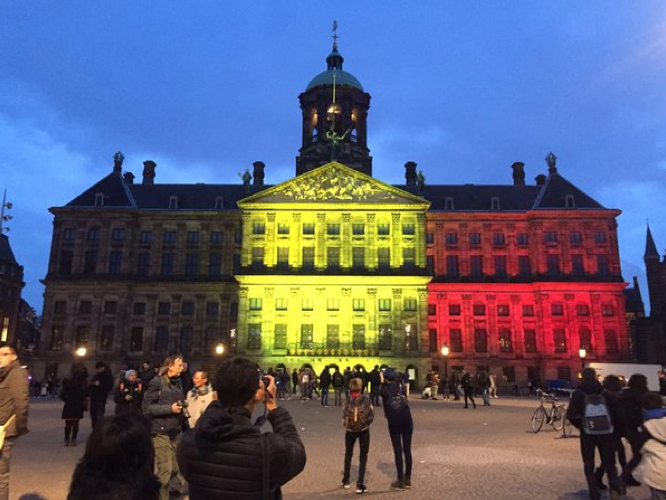 The palace on the Dam in Amsterdam. Via Gemeente Amsterdam Facebook

A number of Dutch Muslim organisations are planning to hold a gathering on the Dam in central Amsterdam on Friday to show their solidarity with the people of Brussels following Tuesday’s deadly bomb attacks.

‘Jew, Muslim, Christian or person without religion; every person of good will has been hit by the terrible images which reached us from Brussels on Tuesday,’ said Said Bouharrou, spokesman for the Moroccan Council of Mosques in the Netherlands.

‘Terror group Daesh is abusing Islam in an inhumane way, close to our borders. Terrorists may be able to take our brothers and sisters from us, but they will never take away our freedoms,’ he is quoted as saying by news agency ANP.

The organisation has asked other religious groups to join forces with the initiative.

On Tuesday night, the palace on the Dam was lit up in the colours of the Belgian flag, like other important buildings all over Europe.

Meanwhile, a Dutch victim of the Zaventum airport explosion, 29-year-old Lennie Wagemans from Horst, has been telling reporters about the massive blast which knocked everyone to the ground when the first bomb went off.

‘When I came round I saw people screaming, bloody faces and total chaos. It was like being in a film,’ she told RTL news. Lagemans and a friend were on their way for a holiday in New York. She has a damaged knee and cuts and bruises, her friend a broken nose and torn ear drum.