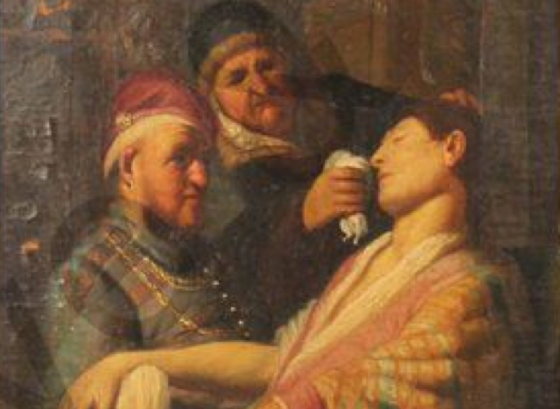 The uncleaned missing Rembrandt, as it went to auction last year

A small panel by Dutch master Rembrandt van Rijn, discovered at a minor American auction house last year, is one of the star attractions at this year’s Tefaf art fair in Maastricht which opens on Friday.

The find brings the total number of paintings attributed to Rembrandt to 341, the NRC says on Wednesday.

The panel, which is a little smaller than an A4, was spotted by Paris-based art trader Talabardon & Gautier when it was put up for sale in New Jersey last September. It was attributed to the ‘continental school, 19th century’ and given a guideline price of $800.

A bidding war for the panel erupted at the auction, with three telephone bidders pushing up the price. It was eventually sold for over €1m, including auction costs.

The panel transpired to be one of the missing panels of the five senses produced by Rembrandt when he was 18 or 19. Sight, Hearing and Touch were found in the 1930s. The New Jersey picture is the missing Smell.

‘There is no possible doubt,’ Rembrandt expert Ernst van de Wetering told broadcaster Nos. ‘The painting is 100% a Rembrandt.’

The painting features a barber/surgeon who is bleeding a young man while an old woman tries to revive him with an ammonia-soaked cloth.

Although it will be on show at Tefaf, the new find is not for sale. It has already been bought by American billionaire Thomas S. Kaplan for what experts say was probably between €3m and €4m. Kaplan now owns three of the five senses. Sight is owned by De Lakenhal in Leiden and what happened to Taste remains a mystery.