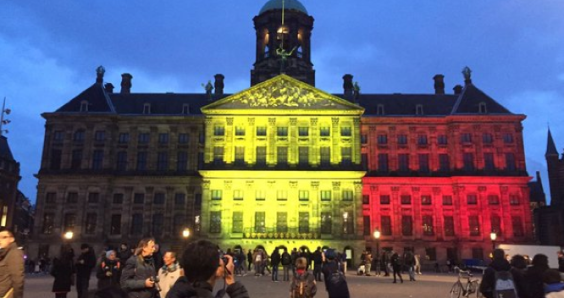 The palace on the Dam in Amsterdam. Via Gemeente Amsterdam Facebook

What are the chances of a terrorist attack in the Netherlands? This is what the papers say.


In its editorial the NRC writes that ‘those who warned that new bomb attacks in Europe weren’t a question of “if” but of “when” were proved right’. The place was significant too, the paper writes: ‘The terrorists wanted to hit at the heart of Europe, and at the European way of life.’

It is significant that the Belgian authorities, after months of searching, failed to come up with any clues, but these terrorists are not operating in a void, ‘a crucial factor’, the NRC writes. ‘It provides opportunities for security services, for instance, via tips from people who don’t condone the attacks. But if the environment of (potential) terrorists is sympathetic to the actions, it becomes a major hurdle. This is what seems to be the case in Molenbeek where the Paris suspects were able to hide and even move about freely,’ the paper writes.

The fragmented nature of the Belgian administration which leads to information not being shared is also to blame, and this should be remedied as a matter of priority, the paper writes.

‘But whether or not the terrorists are foreigners or home-grown is not important. Radical ideas are part of globalisation. In an open society like ours attacks can happen anywhere, including in this country. The Netherlands must realise that it is as vulnerable as any other country. Dutch cities could have their own Molenbeek,’ the NRC concludes.

The Volkskrant talked to Edwin Bakker, head of the Centre for Terrorism and Counter-terrorism, who says the Netherlands is better prepared for a terrorist attack. Unlike the Belgians, the Dutch authorities and secret services have a better insight into what is happening in cities and neighbourhoods thanks to the so-called ‘chain approach’ which sees neighbourhood policemen, social workers, parents and teachers alert for signs of radicalisation. Returning jihadis are also closely monitored.

According to Clingendael terrorism expert Bibi van Ginkel the fact that the Netherlands hasn’t been attacked yet is a matter of ‘better monitoring, better prevention and luck’.

The question of what drives people to become terrorists is not an easy one to answer, Van Ginkel says. ‘The fact is that the process of radicalisation is speeding up. A person can go from completely normal to ready to blow himself up in the space of two months. Interviews with people who came back from Syria show a variety of motivations. It can be to do with the measure of integration, the lack of opportunities for immigrants, influences from their immediate environment – we don’t really know.’

In Trouw, philosopher Rico Sneller proposed a Freudian explanation for the urge to commit suicide for a cause: ‘People have both the urge to live and the urge to die. In normal life both urges are repressed; extremes are avoided. (..) If you want to destroy yourself with drink or drugs, help is available until the urge to self-destruct diminishes. For a suicide terrorist destruction is the main aim and IS delivers the context which unleashes that urge: fighters are so brainwashed they no longer have any inhibitions.’

In Elsevier, commentator Afshin Ellian says: ‘Candles, flowers and teddy bears are not the answer to Muslim terrorism. Western democracies need to answer an urgent political question: what is the place of political Islam in Europe?’

The answer is a decision about war and peace, freedom and security, freedom of religion and religious mania and Them and Us, according to Ellian. ‘But Western politicians have put off a definitive answer for the last decade hoping it would go away. However, enemies don’t simply disappear and the politics of postponement has yielded a poisonous result: the growth and modification of a fifth column in our cities. Jihadis are not touched by the sorrow of the West. We can’t call them to account but we can call our politicians to account for being negligent,’ Ellian writes.