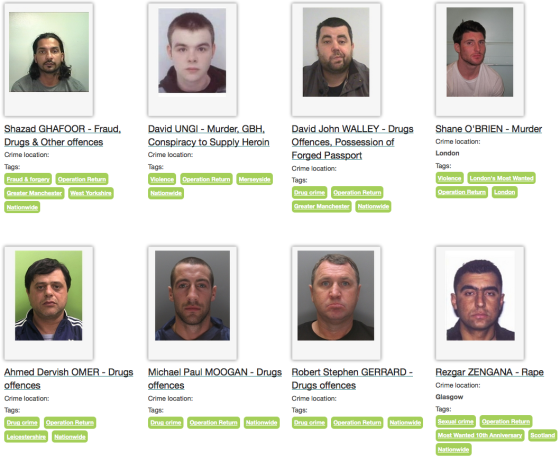 Five more criminals have been added to the British police’s most wanted list of fugitives thought to be hiding out in the Netherlands.

‘Operation Return’ is a campaign conducted by the British national crime agency and crime-fighting charity Crimestoppers together with the Dutch police and crime hot line Meld Misdaad Anoniem.

Since it was launched in 2010, 10 out of 14 wanted fugitives have been apprehended and five new faces were added to the list on Tuesday. David Ungi (24) from Liverpool and Shane O’Brien (28) from London are wanted in connection with separate murders; and David Walley (40) and Shazad Ghafoor (29) from Manchester and Ahmed Ohmer (45) from Nottingham are wanted for drug trafficking offences.

The agencies are also targeting the facilitators who supply fake identities, as well as the businesses – car rental and housing companies in particular – who accept these identities, said Dutch police spokesman Oliver Dutilh.

Crimestoppers and the NCA have organised similar international appeals in the past. Since 2006, Operation Captura was successful in tracking down 75 out of 86 British fugitives in Spain.

‘Our success in Spain displaced some of these criminals to the Netherlands,’ said David Allen, head of the UK International Crime Bureau at the NCA.

‘The Netherlands is a benign environment for British criminals. Everyone speaks English and it’s easy for them to blend in with so many British people living and visiting here,’ he said.

‘The Netherlands is also a major location in the international drug trade, along with Britain and Spain. The individuals who come here become part of that network, and carry on being involved in crime.’

Two of the fugitives sought under Operation Return are believed to be linked to a Rotterdam café raided in 2013.

The café was a members-only establishment where high ranking drug traffickers would arrange deals and swap knowledge and contacts over coffee.

‘British criminals are very entrepreneurial,’ Allen told DutchNews.nl. ‘They take advantage of anything. If they were legitimate businessmen they would be as highly successful as Richard Branson.’