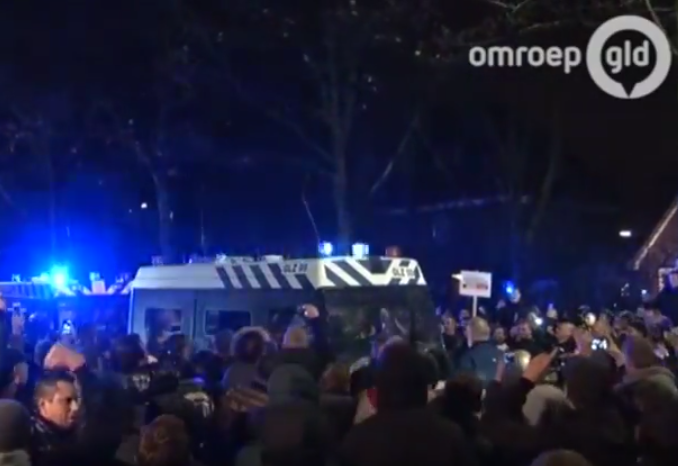 Riot police fired warning shots in Geldermalsen on Wednesday night after protests about plans to build a refugee centre in the Gelderland town erupted into violence.

Police sealed off the town hall where the debate on the plans was taking place with fencing, but protesters, said to number about 100, pelted the building with bottles, bricks and fireworks. Several windows were smashed.

The meeting was abandoned on the advice of the police. Some 15 minibuses carrying riot police had been drafted in to deal with the trouble.

There were at least 14 arrests and two police officers were slightly injured in the clashes, the Telegraaf reported. At one point explosives experts were brought in to deal with a large firework which had not exploded.

Police had restored calm at around 22.30. Locals told reporters the troublemakers were not from Geldermalsen itself.

Mayor Miranda de Vries said on Twitter: ‘And people say they are frightened of asylum seekers. I am very very sad about this.’

The town hall meeting had been called to discuss plans to build a refugee centre for 1,500 people. Geldermalsen has a population of some 14,000.

Junior justice minister Klaas Dijkhoff said in a reaction that ‘this is not how we deal with each other in the Netherlands.’

‘This is unheard of,’ he said.