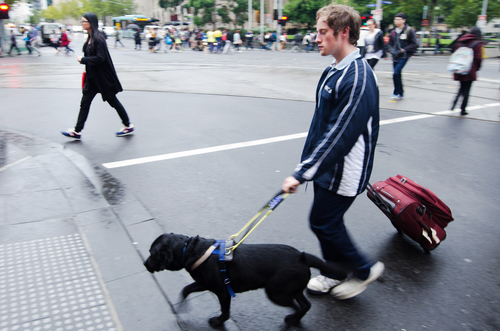 A blind couple were abandoned in woodland after their guide dog was attacked by another dog on Sunday, local broadcaster AT5 reports.

The couple, named as Jasper and Marion, were left stranded in Diemerbos with their dog Ian, who was bleeding and unable to lead them to safety, after the other dog’s owner fled the scene.

‘The owner shouted at us to call our dogs to heel, but his dog went straight into a fight with Ian,’ said Jasper. ‘He [the owner] had difficulty separating his dog from Ian. We spoke to the man but he ran away. Marion tried to go after him but he got in his car and drove off.’

Ian was given emergency treatment by a vet but it is unclear if he will be able to resume his work as a guide dog.

‘Incidents like these can cause long-term anxiety towards other dogs,’ said Peter van der Heijden of the Royal Dutch Guide Dog Foundation (KNGF). ‘That would make Ian unsuitable for guide work. Guide dogs need to be 100% dependable in their work.’