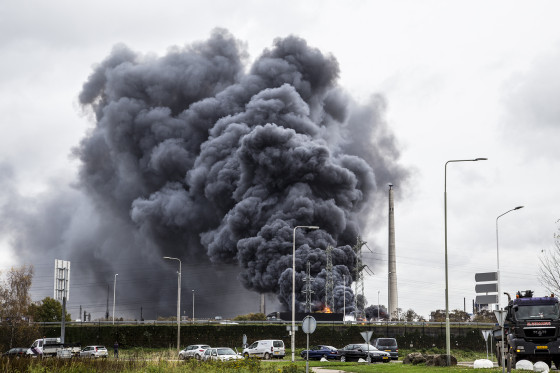 A massive fire at a chemical plant in Maastricht sent plumes of dense black smoke over a large area and locals were warned to stay indoors with doors and windows closed on Monday afternoon.

The fire broke out at a storage facility on the Chemelot industrial estate near Geleen, prompting smoke warnings in a string of nearby towns and villages, including over the border in Germany.

Schools were also closed and pupils told to stay indoors until fire officials gave the all clear, news agency ANP says. Train services were also disrupted because of the smoke.

The fire was brought under control by late afternoon.

At the fire’s height, the emergency services issued a Grip 4 alarm, which is the highest phase available. According to the Chemelot website, the warehouse was used to store plastics rather than chemicals.

The website states the fire started during repair work on the roof of the storage facility. Workers were using open flames to put new bitumen on the roof which led to the fire.

There have been a string of incidents at the site this year.

On November 5 there was a fire in an ammonia plant. In August, a leak at a factory polluted the Maas river with pyrazoles, an organic compound which is released in the making of medicines and pesticides.

In July a Sabic chemicals factory was shut down for a period after a mysterious powder leaked into the atmosphere. In another incident, locals had to deal with an unpleasant smell because of problems with a storage tank containing the fuel naptha.

The Chemelot industrial state in southern Limburg is home to dozens of chemicals companies and was opened in 2005.