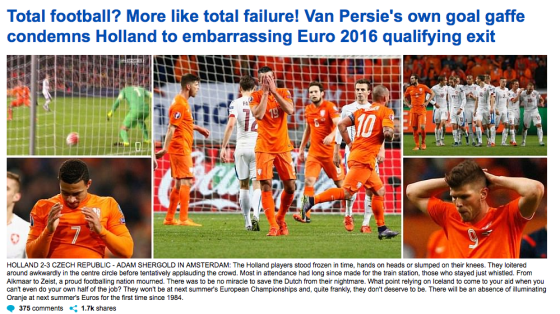 The Netherlands have failed to qualify for next summer’s European football championships in France, after losing 3-2 to the Czech Republic in a game they had to win.

An own goal from Robin van Persie added to the Dutch misery.

However, the Dutch would have been out even if they had won, because Iceland lost 1-0 to Turkey, giving the Turks a crucial three points and putting them firmly ahead of Oranje in Group A.

The Dutch failure is more remarkable because Uefa had expanded the competition from 16 to 24 countries to try to ensure all major European countries are included.

The Dutch papers were damning in their coverage. ‘Everything has gone wrong with Oranje,’ wrote the AD. The match against the Czech Republic is symbolic for the whole group competition, the paper said: ‘chaos, doubt, errors and weakness’.

The Volkskrant said: ‘The Dutch team are like a rudderless ship in terms of football, coaching, technical ability, creativity – everything in fact.’

‘While Wales, Northern Ireland, Albania and Iceland will be at the party in France, Holland will be watching on their television sets at home. The country of Cruyff, Van Basten, Neeskens, Rijkaard, Gullit – not attending. It seems scarcely credible, yet here we are.’

The last time Oranje failed to qualify for a major tournament was the 2002 World Cup.

Dutch coach Danny Blind took over at the start of July after Guus Hiddink left the job. He had taken over from Louis van Gaal, who took Oranje to third place in last year’s World Cup.

Blind has lost three of the four matches he has covered but says he has ‘no intention’ of stepping down. ‘I’m going to carry on with my work because I’m under contract until 2018 and I believe in this team,’ Blind is quoted as saying by the BBC.

Blind’s appointment was criticised at the time because he had  only been head coach once before. He coached Ajax in the 2005/06 season and was then sacked.