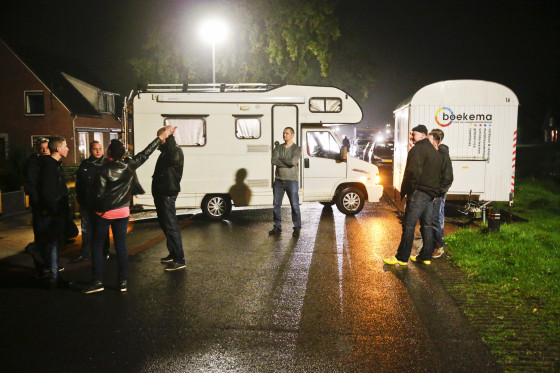 Two buses carrying asylum seekers to a holiday camp next to the tiny Drenthe village of Oranje arrived at their destination on Tuesday night after villagers gave up their blockade.

Angry locals closed the roads for several hours in an effort to stop the buses arriving after it emerged officials had broken a commitment to limit refugee numbers and were planning to place an extra 700 new arrivals in the holiday camp.

They were briefed about the decision to break a commitment to limit refugee numbers earlier in the evening. King’s commissioner Jacques Tichelaar told reporters he was furious at the decision.

‘Oranje is already taking care of more refugees than possible… doubling their number without decent discussion is incomprehensible,’ he said.

Locals also heckled junior justice minister Klaas Dijkhoff when he turned up to explain his decision directly. His car was stopped from leaving as villagers blocked several roads.

‘The deal has been broken… we are very, very angry,’ one villager told broadcaster Nos.

Last year the village of 140 people won a government commitment to limit the number of refugees in the village to 600 but that has since expanded to 700. The council and the refugee accommodation board had planned to house 1,400 refugees on the holiday park next to the village.

Locals first called for a freeze on refugee numbers last month after saying they felt swamped by so many new arrivals. Most of the refugees currently living in the holiday park are families from Syria.