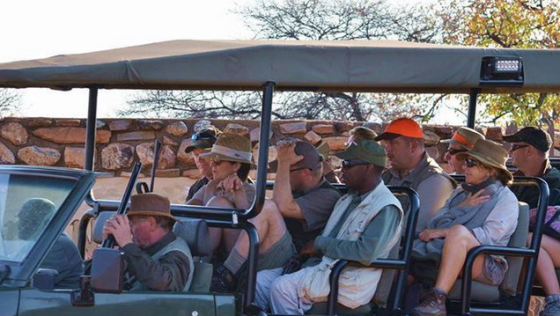 A Dutchman who moved to South Africa in 1997 to set up a fruit exporting business is at the centre of a drive hunt allowing foreign hunters to shoot wildlife as it is herded past them, animal welfare groups say.

Anton de Vries, who is one of the owners of SAFE, South Africa’s fifth biggest fruit exporter, is said to be behind the hunt which is taking place at three three farms in Limpopo. The hunt master is said to be Dries van Rooyen, who also works for SAFE, Wildlife at Risk International reported.

De Vries has declined to comment on the claims when approached by reporters. A receptionist told reporters from TimesLive.co.za she had been ordered not to reveal De Vries’s cellphone number. She said the company ‘had nothing to do’ with the excursions. The SAFE website has since been taken offline.

South African broadcaster Carte Blanche said it had been told at a meeting with De Vries and local officials that 13 Dutch and Belgian nationals are taking part in the hunt near the town of Alldays in Limpopo province.

The hunters take aim from purpose built platforms overlooking the bush as the animals are drive towards them. In the first three days, over 50 animals, including baboons, warthogs and antelope had been killed.

The outcry comes just two months after the global furore surrounding the killing of Cecil the lion in Zimbabwe by an American dentist.

The National Council of SPCAs, the South African animal welfare group, has appealed for the driven hunt to be halted. Activists have also tried to have the hunt stopped by going to court.

Driven hunts have been banned in the Netherlands since 2002 but are not illegal in South Africa. However, the practice is widely considered unethical and inhumane, news channel Carte Blanche said.