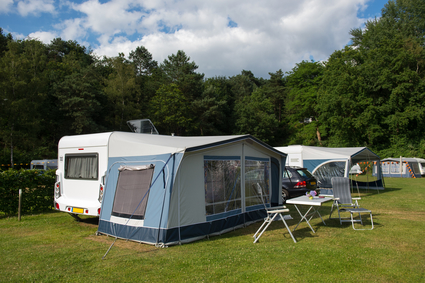 There has been a sharp drop in the number of Dutch families planning a camping holiday at home or abroad this year, according to research by TNS Nipo for the Dutch tourist board NBTC.

The number of families planning to put up their tent in France or other foreign destinations is down by 5% at 1.9 million and there has been a 13% drop in the number of people who have set their sights on camping in the Netherlands.

‘Camping has been declining in popularity since 2003 but it is a mystery as to why,’ Margreet Toonen, who teaches tourism at Breda hbo college, told Trouw.

However, two niche sorts of camping holidays are increasing in popularity, Toonen said. Glamping or glamorous camping has taken off and, at the opposite end of the spectrum, camping on very simple sites with basic amenities has kept its popularity.

The rise in cheap holidays to Turkey and other sunny destinations is one reason for camping’s decline, Toonen said. ‘People have a lot more choice and simply can’t be bothered with all the fuss,’ she said.

Marike Rosier, spokeswoman for campsite owners’ organisation Recron, said this is particularly the case with youngsters. ‘They used to go the Wadden Islands with a tent but are more likely nowadays to take a cheap flight to Spain, she told Trouw.