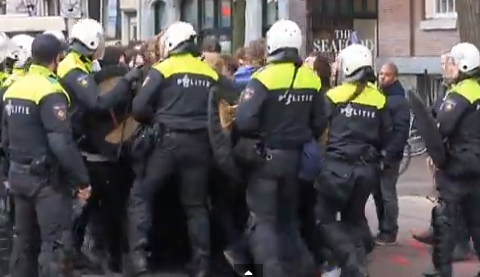 Amsterdam University’s board has made a ’managerial blunder’ by calling in riot police to clear protesting students from the university’s administration centre, over 100 lecturers and professors say in a letter in NRC.next.

The occupation of the Maagdenhuis offices was ended on Saturday when riot police moved in, even though the students had said they would leave voluntarily on Monday.

‘What possessed the board to make such an error again?’ professor Ewald Engelen and senior lecturer Olav Velthuis say in the letter. ‘Could they not have waited until Monday?’

The action has eroded all the goodwill the board had been building up after weeks of talking to the students and making several concessions, the letter states.

‘Would it not be better for a new board with a spotless reputation to take over and begin the necessary process of renewal?’ the letter, which was signed by 100 co-workers, states.

Board chairwoman Louise Gunning told Radio 1 news on Monday staff and students were welcome to put questions to the board at their weekly question and answer session on Monday afternoon.

Clearing the building was necessary to ensure public safety because 700 people had registered for the weekend’s ‘festival of arts and science’, when the building can only host 300.

‘No permit was asked for and there were incidents involving violence in the previous nights,’ she said. ‘We could not take the risk that would happen at the weekend.’