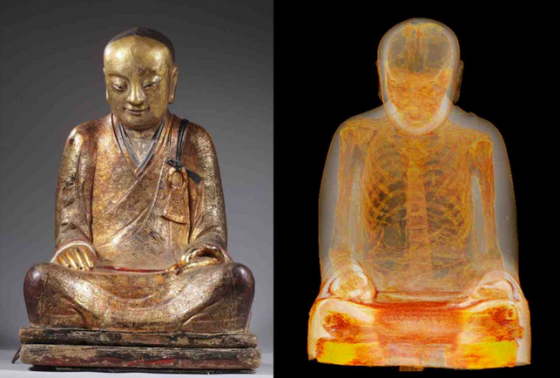 A Dutch private collector who owns a Buddha statue with a mummy inside it will return it to a Chinese village if it is proved to be stolen from there, the NRC reports.

The collector told the paper the Buddha can be returned if the original community which owned it is traced but that he will not hand it over to a Chinese state museum.

Questions about the 1,000 year old Buddha’s ownership have arisen since it became the star item in a show at the Hungarian natural history museum in Budapest.

Pictures of the Buddha were shown on a Chinese news programme, leading villagers in Yangchun to claim it had been stolen from their temple in 1995.

However, the collector says he has photographic evidence it was already in the Netherlands at that time. He has since withdrawn the statue from the exhibition, fearing it could be stolen.

The NRC says the owner is currently researching the statue’s origins, including carrying out DNA tests. The owner, whose identity has been kept secret, claims to have bought it for 40,000 guilders (around €18,000).

In a statement to Chinese news agency Xinhua, the owner said he bought it in 1996 from another collector who had acquired it in late 1994 or early 1995 from a Chinese artist friend.

The statue’s secrets have gradually been uncovered over the past few years and cat scans were done in 2013 and 2014, revealing the skeleton. The Buddha has also been on display at the Drents Museum in Assen for some time.