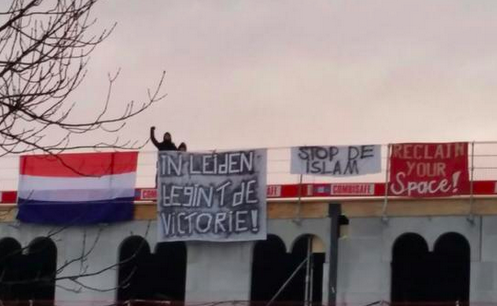 Dutch Muslim organisations say they are concerned about an increase in anti-Muslim incidents following Saturday’s ‘occupation’ of a mosque under construction in Leiden.

‘This was organised and could be the beginning of an escalation,’ lobby group Contactorgaan Moslims en Overheid (CMO) told the Volkskrant. ‘We are really worried about what might come next.’

On Saturday morning five men aged between 21 and 35 climbed onto the roof of the mosque and hung up banners reading ‘stop Islam’ and ‘the victory begins in Leiden’.

The men were arrested for trespassing on a building site, questioned and later released.

‘This is the first act in a series against the Islamisation of the Netherlands,’ the Facebook page said. The group called on ‘all activists and sympathisers in the Netherlands and Flanders’ to join the resistance movement.

‘This is unlike other incidents,’ said CMO’s Yassin Elforkani. ‘Those were carried out by individuals. There are enough signs we should be worried about this group.’

There has been a rise in anti-Muslim incidents in the past few months. In Almere, a man drove into a group of girls on his bike, kicked them and called them ‘c*** Muslims’. In Rotterdam, a girl was spat at and mosques sprayed with graffiti.

Identitair Verzet, which has over 5,000 likes on its Facebook page, is led by noted right-wing extremist Paul Peters, according to anti-fascist research group Kafka.