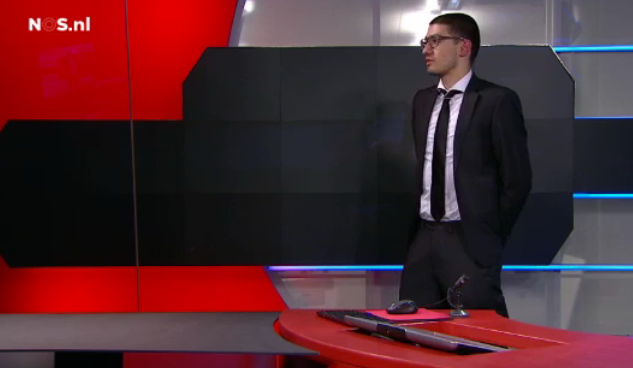 The young man who forced his way into the headquarters of Dutch public broadcaster Nos on Thursday evening is a 19-year-old youth from Pijnacker, close to Delft, the public prosecution department told a news conference.

The youth, who gave himself up when ordered to by police, had demanded access to airtime. He has been named on social media as Tarik Zahzah and according to unconfirmed reports is a student of chemistry at Delft University of Technology.

The Nos studios were evacuated for several hours as police searched the building after the youngster was overpowered. The actual incident lasted around 10 minutes.

Footage broadcast after the incident shows the teenager in glasses and a suit pacing and talking to a security guard. The gun he was carrying later turned out to be a fake.

‘There are major world affairs which we want to bring to the public,’ he is heard to say. ‘We have been hired in by the security services. There we have heard things which call society into question.’

At a certain point the man noticed the police who shouted at him to drop his weapon. The man did this almost immediately. He then lay on the ground, as instructed, and was handcuffed.

RTL news showed pictures of the letter the intruder gave to the security guard who escorted him to the studios. In it Zahzah claims 98 hackers are poised to launch a cyber attack and that eight bombs containing radioactive material have been placed around the country.

The youth is now being held at Hilversum police station for questioning. According to BNR radio, his home is also being searched.

Several fellow students have been speaking about Zahzah in the Dutch media. One describes him as a ‘quiet intelligent boy’. Another said he had not been seen for around four weeks.

Nos said on Friday the youth lived with his Dutch mother who is divorced from his Egyptian father.