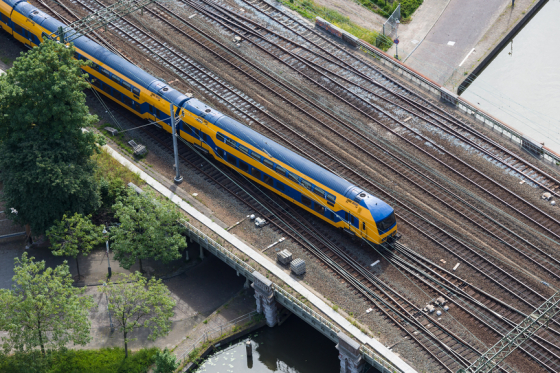 Commuters in Britain are angry at a 2.5% train ticket price increase this year, and several newspapers have hinted that foreign rail operators such as NS subsidiary Abellio are cross-subidising their Dutch services.

Abellio runs Abellio Greater Anglia and, together with Serco, the Merseyrail and Northern Rail services. It has also just won the contract to provide rail services in Scotland.

British commuters spend more than twice the proportion of their income on train fares than passengers in the rest of Europe and British papers say they are effectively subsidising foreign rail services.

According to the Daily Mail, an annual season ticket between Amsterdam and Leiden costs the equivalent of £2,100 but a London to Woking ticket – a similar distance – costs over £3,000.

However, the NS has denied it is cross-subsidising its Dutch services with British taxpayers money.

‘This is not allowed and Abellio and NS’s cash flows are strictly separated,’ NS spokesman Eric Trinthamer told OV Magazine.

‘We make a very modest profit on our English contracts of about 3%,’ he said. ‘Of that, a fraction – 10% to 15% – flows back to the parent company. The rest is invested in services.’

A Deloitte report for the Dutch finance minister last year also said there is no evidence of cross-subsidies.

Some 30% of NS profit goes to the Dutch treasury in dividends. Abellio, which also operates in Germany, booked turnover of €1.6bn in 2013, while NS itself turned over €2bn in the Netherlands, OV Magazine said.

Dutch Labour MP Duco Hoogland told BNR radio that British commuters are right to be angry. However, the blame for the high ticket prices rests with the British government rather than an effective company like Abellio, he said.