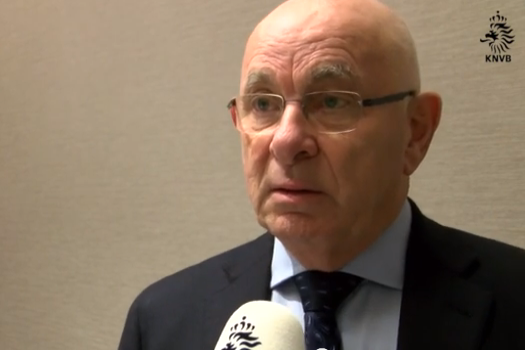 Dutch football association chairman Michael van Praag outlined his campaign to take over the Fifa presidency from Sepp Blatter on Wednesday, saying he will only serve for one four-year term.

Van Praag says he has the backing of six national football associations: Belgium, Sweden, Scotland, Romania and the Faroe Islands, as well as the Netherlands. Five nominations are necessary to be a candidate.

In total, 209 footballing nations will vote for the president on May 29.  Jérôme Champagne, David Ginola, Ali bin Al-Hussein and Luis Figo have also come forward as potential challengers to Blatter, who has been president since 1998.

During a news conference on Wednesday afternoon, Van Praag, who is 67, said he wanted to modernise the organisation.

‘Fifa could mean so much more to football,’ he is quoted as saying by the NRC. ‘But in order to do that, you need to modernise. Change and greater transparency are part of the spirit of the times.’

Van Praag said he had nothing against Blatter personally. ‘But someone who has been chairman of Fifa for so long, an organisation hit by corruption and scandals, can no longer be the face of the organisation,’ he said.

In addition, money should be spent on football, the KNVB chairman said. He referred to last year’s €20m film project. That sort of money would be better spent on developing football instead, he said.

Next month, Van Praag said he will present his plans to modernise Fifa and would begin lobbying key figures in international football for their support.